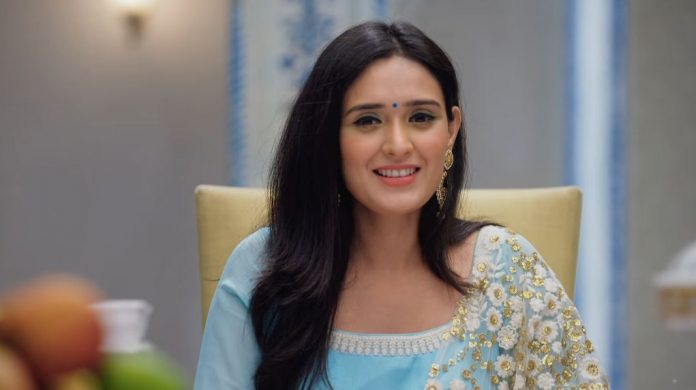 Yeh Rishta Kya Kehlata Vedika heedless move lined Kartik and Naira celebrate their Mehendi ceremony happily with Kairav and entire family. Naira misses out Vedika and enquires. Dadi doesn’t want her to stress about Vedika. Kartik tells her that they will talk to Vedika after the ceremony. He relieves her worries. He asks her to compliment his mehendi. Naira asks him not to be upset. She feels proud of him. They happily dance to add colours in the ceremony. Vedika gets hurt watching them happy. She feels alienated. Naira tries to talk to her and know what’s bothering her.

Vedika doesn’t respond nicely. She instead blasts her anger. Naira understands that Vedika’s emotions are getting hurt. She feels sorry for Vedika. Vedika feels sick and gets timely help from her friend Pallavi. Pallavi asks her not to leave her rights on Kartik and Goenkas. She reminds that Kartik can marry Naira only if Vedika divorces him. She tells that Vedika should miss the divorce hearing so that the divorce doesn’t get accomplished. She tells that this is the only way by which she can keep Kartik in her life. She asks Vedika not to be happy for selfish Naira. She wants Vedika to be selfish and not hurt herself by making such a big sacrifice.

She tells that she will accompany her to the court. She consoles Vedika. Vedika agrees to Pallavi’s advice. Pallavi asks her to fight for her love and not lose like that. Vedika is convinced. Dadi tells Suwarna and Naira that its wrong to bring Vedika home, Vedika would be hurt to witness the marriage. She tells Naira that people experience the same pain on losing love. She warns Naira. Naira is worried. Pallavi asks Vedika to come with her. Naira interrupts them. Vedika trusts Pallavi. She knows Pallavi is her well wisher. Naira invites Pallavi. Vedika tells Naira that she isn’t okay at all. Vedika finds Kartik very happy. She sheds tears.

Kartik shares a moment with Naira. They have romantic plans post their marriage. They look ahead to get married. Naira tries to meet Vedika and clarify things. She asks Vedika to speak out and vent out her frustration. She wants to help Vedika. Vedika doesn’t voice her emotions. She gets influenced by Pallavi. She thinks to meet Kartik. She goes to meet Goenkas. She overhears Dadi and Suwarna’s conversation. She is much hurt that Dadi doesn’t trust her now. She feels Naira has snatched everything. Vedika decides to stop Kaira marriage by not going in the divorce hearing. Will Vedika succeed in ruining Kaira happiness? Keep reading.