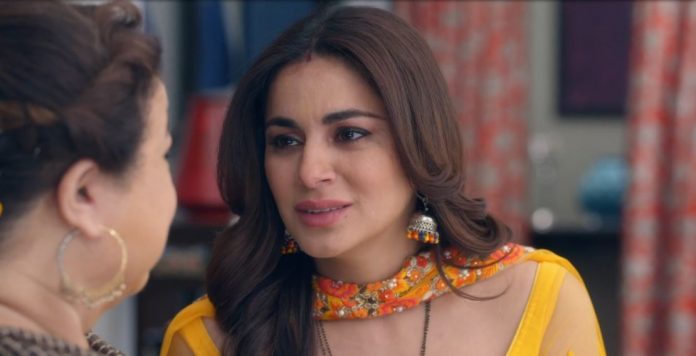 Kundali Bhagyaa Strong revolt Luthras on envy mission Karan shocks Preeta by getting his family to the Kumkum Bhagya wedding hall. Preeta isn’t in any state to react. Sarla knows that Karan has done this to insult Preeta. She wants Preeta and Shrishti to be at home. Shrishti gets upset that Karan cheated them and booked the hall for his marriage function to insult them. She wants to assist Sarla in work. Biji asks her not to let Karan win by reacting. She wants Sarla to handle everything. Sarla shouts on Kareena. She wants Kareena to get lost. Kareena takes her aside to threaten her. She asks Sarla not to disturb their celebrations. Sarla wants them out of sight.

Kareena reminds the booking done by her lawyer. Sarla can’t believe this. Kareena tells that she is doing this to take revenge. She wants to rule over Aroras by making them servants. She asks Sarla to welcome her guests and respect Luthras. Kareena knows Sarla will be compelled to do this. She doesn’t want to forgive Sarla. Sarla returns home to find a solution. She wants to return the cash to Luthras and kick them out. Shrishti wants to know what’s happening. Preeta knows Sarla is angry on facing Kareena.

Sarla tells them that Luthras booked the hall by cheat just to hurt Preeta and insult them. Ramona doesn’t like the hall. Kareena tells that even she doesn’t like it, but she is helpless for her motive. She tells that Sarla and Preeta have insulted Mahira and her. She promises to keep the marriage in a lavish hall. Sarla returns the money to Kareena to oust her. Kareena reminds Sarla her status. She asks Sherlyn to find out Sameer. Ramona tells Sarla that the some of the money is spent in decorations. Kareena doesn’t want to accept half amount. Sarla tells that she will be returning total amount within a day.

Consequently, Kareena threatens her by showing the contract. Sarla is helpless because of the signed contract, which won’t entitle her with rights to cancel the booking. Sarla is ready to go to the court. She wants Luthras out. Kareena promises to ruin her completely. Shrishti intervenes to defend Sarla. Sarla tells that they won’t be part of the function. Karan wants Preeta there so that he can show his happiness to her. Sarla asks Shrishti not to follow her. She tells that Kareena didn’t take the money back. She is much upset seeing Sarla cry. Preeta learns the huge trap by Karan. Shrishti gets angry and reveals about Kareena’s clever move.

Preeta consoles Sarla. She doesn’t want Sarla to get sorrowful. She tells Sarla that they will not cancel the booking and fulfill it. Sarla regrets for being greedy and falling into the trouble. She blames herself. She tells that she wanted to buy some happiness for her daughters. She asks them not to go in the function. Preeta tells that she isn’t affected by Karan. She asks Sarla not to feel guilty. Sarla knows Preeta is hurt. Preeta denies it. Sarla loses to Luthras. Sarla tells Biji that Preeta is hiding the pain.

She shatters thinking of Preeta. She is angry that Karan is intentionally hurting Preeta. She never imagined that she would be so helpless and see this day in life. She curses herself for becoming a reason of sorrow for Preeta. Biji asks her not to fight with fate. She wants Sarla to just pray and be strong in front of Preeta.