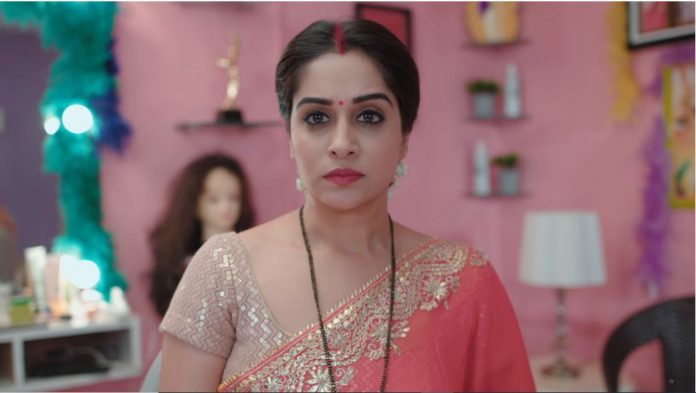 Kahaan Hum Sonakshi stunning decision Rohit mystery Rohit and Sonakshi have sweet moments. He isn’t able to tell anything to Sonakshi, even when she asks him to swear on her. He lies about a complicated case of his patient. He tells that he isn’t able to handle things. He regrets that an innocent person’s life is at stake. She tells him that though she isn’t able to help, she will wish that everything gets fine. She is sure that he will manage things on his own and that too the best way.

On the other hand, Veena is much upset because of Naren’s anger. Naren is angry that he lost his friend’s support because of Sonakshi. He feels Sonakshi is nothing, but a problem for his family. Sonakshi overhears their conversation. She gets upset, but doesn’t react in front of them. Nishi and Yash are worried because of Rani’s demands. Rani shocks them by picking the costly diamond bracelet. Rani tells them that she wanted the bracelet since long. Rani demands 5 crores. She tells that she will take it as a gift.

She threatens them about revealing the drama truth to Pooja, who will hate them once the truth comes out. Nishi is afraid and lets her get away with the bracelet. Rani is glad that her plan is working. Sonakshi tells Veena that she has a home remedy for good relief for high blood pressure. Veena feels sorry for Sonakshi. She is stuck between Naren and Sonakshi’s problems. She gets stressed. Sonakshi finds the bracelet with Rani and asks how did she get it from Nishi. Rani lies to her that Nishi has herself given it to her as a token of respect to please Pooja. She tells that she tried to refuse, but didn’t wish to break Nishi’s heart.

Sonakshi doesn’t think that Nishi should give costly gifts to Rani. She takes Rani to Nishi. She asks Rani to return the bracelet, there is no need for any bribe to please Rani or Pooja. She tells that Rani just wants to spend few days with Pooja, she doesn’t need any money. Rani gets angry that Sonakshi failed her plan. She thinks to target Sippys when Sonakshi is away. Sonakshi and Rohit find Veena disturbed. They promise to sort the problems. Sonakshi knows that Naren’s condition is disturbing Veena. She wants to help Veena. She loves Veena a lot. Veena tells her that she loves her a lot.

Rohit asks Veena to play a day out. Sonakshi reaches the shoot sets and thinks of Veena’s disturbed state. She wants to accept Naren’s condition. Sonakshi gets into a huge dilemma. She decides to quit her career. Sumit disagrees with her. He wants her to talk to Rohit once. Sonakshi gets firm on her decision. Nishi and Rani get into a clash about Pooja’s outing at night. Nishi wants Pooja to be safe.

She doesn’t want Pooja to attend the late night party. Rani supports Pooja just to make her against Nishi. She shows Nishi what she can do by her drama. She insists Nishi to give her the money. Rohit meets Rani and warns her once again to stay in her limits. Will Sonakshi learn about Nishi’s planted person Rani? Keep reading.