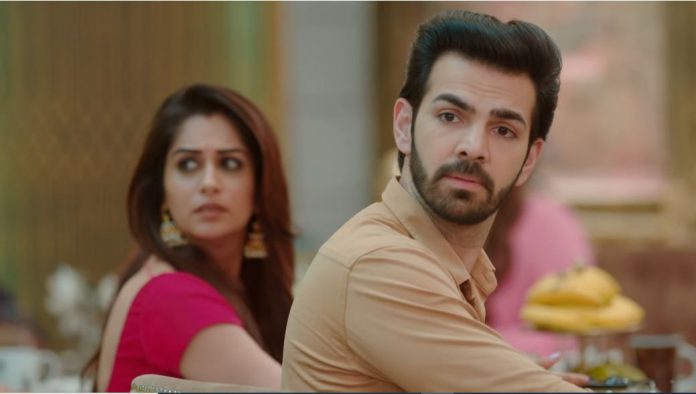 Kahaan Hum Starplus Rage burst Rohit Sonakshi Upcoming Rani is much worried to get the letter related to Sitara. She doesn’t want Sonakshi to read it. Sonakshi hands over the letter and questions Rani. Rani lies to her and doesn’t let her know about Sitara. Sonakshi doesn’t think much. Nishi wants to dine with Pooja. She learns that Pooja has gone out with Rani. The family gets panicking on finding Pooja’s phone at night. Nishi tells Veena that she is much scared for Pooja. Sonakshi pacifies Nishi. She calls Rani, who doesn’t answer. Rohit has learnt about Rani’s daughter Sitara. He tells Nishi and Sonakshi that he will handle Rani. He asks them to stay relaxed. He asks Sonakshi to go for her shoot.

She thinks if she did any mistake by getting Rani home. She wants to know Rani’s truth. She goes to meet Rani before her shoot. She doesn’t find Rani there. She comes across a guy who tells her about Rani’s daughter Sitara, who is getting released from the jail today. She is super shocked to know that Rani’s daughter is a criminal. She thinks Rani is Pooja’s mother, and also has another daughter Sitara. She rushes to inform Rohit. Rohit calls Rani and asks her to meet him at his hospital. He asks her to safely drop Pooja home.

Rani insists him to give her 5 crores first. He threatens her of police. Rani agrees to drop Pooja home. Sonakshi calls him and learns that he is busy at his hospital. Rani reaches Rohit to get his money. Sonakshi thinks to meet Rohit. Rani is happy to get the cheque. She finds the blank cheque and gets angry. When she threatens him, he reminds her weakness Sitara. He tells her that he knows about Sitara, who is now in his clutches. She learns that someone has already taken Sitara from the jail. She demands to know about Sitara.

He tells her that she likes to play games with Pooja and Nishi, so he also thought to play similar games with Sitara and her. He tells that once she does Nishi’s work of creating hatred in Pooja’s heart, she will get Sitara back. He reminds her task and reprimands her for acting smart. He tells that he will keep Sitara safe until she breaks Pooja’s heart. Pooja tells Sonakshi that Rani took her to a temple. Sonakshi asks her to have breakfast. Later, Suman meets Netra to renew Sonakshi’s contract. Netra insists that Sonakshi tells the same to her. She doesn’t want to make the contract in Sonakshi’s absence.

Netra tells Suman about Sonakshi’s decision of quitting the show. Suman is much shocked. Nishi is thankful to Sonakshi for handling Pooja well. Rani apologizes to Nishi. She tells that she will do her task and leave from their lives. Rohit has promised to give her 10 lakhs. Sonakshi meets Rani and yells at her for hiding the truth about Sitara, a criminal. She tells that she hates lies. Nishi pretends to be ignorant. Sonakshi doesn’t want to forgive Rani. Nishi and Yash tell Sonakshi that they should protect Pooja. Suman breaks the news to Rohit that Sonakshi is leaving her show. This leaves him shocked.