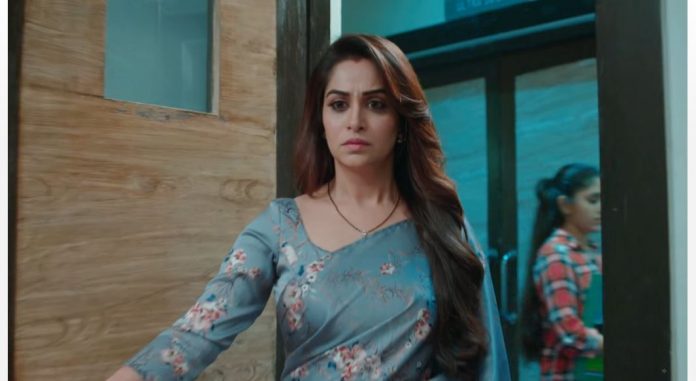 Kahan Hum Tum Starplus Sonakshi slap drama lined Rani plays a new move and arrives at Rohit’s hospital just when Sonakshi is going to meet him. Rani begs Rohit to tell her about her daughter Sitara. She tells him that she isn’t Pooja’s real mother, still Nishi hired her to play a bad mother and break Pooja’s heart. She feels that she has done her work well and now wants to get away with Sitara. She asks Rohit to forgive her for her blackmailing step. She wants an answer from him. Sonakshi barges into his cabin and sees Rani pleading him. Rani asks Sonakshi to save her and ask Rohit to tell about Sitara.

Sonakshi doesn’t hear that Rani isn’t Pooja’s real mum. Rani asks for her Sitara. She tells Sonakshi that Rohit did wrong and is blackmailing. She reveals the entire truth that she is Pooja’s real mother. She tells how Rohit, Nishi and Yash got her to Sippy mansion to play Pooja’s real mother’s role. She tells that she just has one daughter, that’s Sitara. Sonakshi wants Rohit to answer. She slaps Rani. Sonakshi makes Rani signs a document, that she will not have any right on Pooja.

She tells Rani that its one time settlement so that Rani doesn’t come back with any sobbing story to influence Rohit. Rani signs the document. Sonakshi tells Rani that Rohit will unite Rani and Sitara. She apologizes to Rohit for not understanding his decision, that’s always for the betterment of the family. Sonakshi and Rohit clear their differences. They have a moment of romance and togetherness after a long time. Rohit takes care of Sonakshi to lessen her stress. He now wants to focus from Pooja’s matter to Sonakshi’s career.

Nimki Vidhayak: Ganga asks Nimki to stay alert of Shukla who can attack her anytime. Nimki is sure to handle herself. Mishra asks her about the training process. She doesn’t tell him anything. She goes home and gets scolded by Abhimanyu. He thinks she is inviting big trouble. She asks him to let her decide few things. Mintu is worried that Dadi left the house because of Anaro. He apologizes to her and tells that he can’t keep Anaro in his house. Nimki tells him that she will convince Dadi. He tells that Dadi is missing. She wants to find Dadi. She agrees to get Anaro to her house.

Anaro doubts on Mintu. She asks Rekha if he is really her Babbu. Rekha tells her that Dadi took care of him and is close to his heart. She gives medicines to Anaro. Sweety tells Nimki that they should leave Anaro on her own. She wants Nimki to stay happy. Nimki tells that she doesn’t want to make Anaro away this way. She has served Anaro for years. She wants Anaro’s life to come on track. Shukla comes to threaten Nimki to know about Ganga’s plan. Nimki jokes on his serious rage. He threatens to kill her.