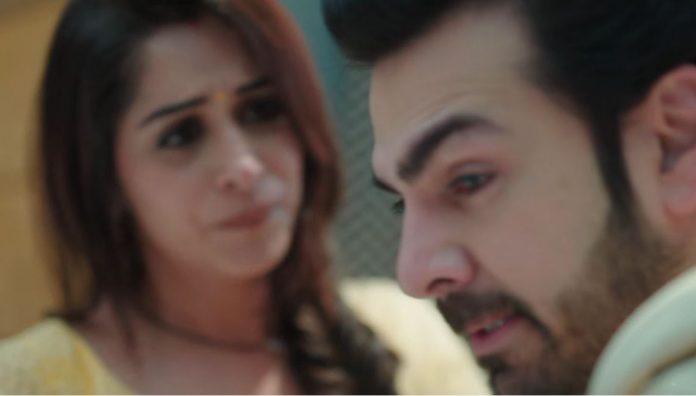 Kahaan Hum Starplus Mysterious spy Ronakshi weak moment Sonakshi is much upset on Rohit for his numerous lies. She doesn’t want to hear any of his clarification. She tells him that she was blaming herself for the family’s disturbed dance. She was feeling guilty that she has ruined their peace by considering Pooja’s emotions and bringing Rani home. She asks Rohit how could he see her in guilt and still not reveal the truth that Rani is Pooja’s fake mother, planted by Nishi. She tells him that none of his explanation can justify his lie. He wants a chance to express himself. She doesn’t want him to lie something else to fool her.

She tells him that once she gives him a chance, he may come up with another excuse to cover up his big lies. Rohit feels sorry. He really apologizes to her. She gives him the same reply as him, that its too late to say sorry. Rohit knows that her annoyance is justified. She blames him for cheating her and entire family. She doesn’t listen to Rohit and accuses him for hurting her heart. She walks away. He follows her and reaches home. He finds her broken and crying. He also breaks down. They don’t talk to each other and just weep on their relation, losing faith. Ajit and Pooja plan the New year party at home.

They are happy to spend time with entire family. Pari surprises Rohan at his home. She makes a work excuse to go to his room and spend time. Rohan and Pari try to trick Tanya. They think Tanya will never doubt on them. Deepa asks Tanya to kick out Pari. She has already revealed Pari’s truth to Tanya. Tanya wants to find a perfect chance to expose Rohan and Pari’s affair. She swears to not leave them free. Pari wishes Rohan and spends time. When she wants to leave, Veena calls her a part of the family and invites her for family lunch.

Pari gets glad to get more time with Rohan. Rohit tells Nishi that Sonakshi isn’t talking to him. Nishi asks him not to reveal any truth to Sonakshi. Rohit meets Sonakshi and tries to end her silence. Sonakshi stays upset. She ignores him. He gets hurt by her behavior, but knows that he is himself responsible for it. Sonakshi warns Pari against any mistake to hurt Sippys. Ajit announces the game for the couples. Naren and Veena win the game, while Rohit and Sonakshi look unexcited. Rohit doesn’t like Sonakshi’s cold behavior.

They lose the game. Naren gets angered on Ajit for his bad game idea where Tanya can’t participate. He insults Ajit a lot for his little mistake. Veena calms down Naren. Sonakshi finds Naren’s anger getting high for no reason. Rohit calls it enough and talks to Sonakshi. She refuses to listen to him. He tells her that he wants to protect someone from the harsh truth, which can break his family. He gets hyper expressive about his feelings. He tells that he is helpless to hide the truth from her. Sonakshi understands his emotions even before he tells it himself.

She tells him that she is aware that he is protecting Veena from the sorrow. She asks if Veena is related to Pooja’s adoption some way. She guesses that Naren is Pooja’s biological father. Rohit breaks down in front of her. He tells her that Naren is indeed Pooja’s real dad, this truth can break his family and moreover Veena’s heart. He doesn’t want Veena to shatter, since she is the one who kept the family united. He tells that Veena loves Naren madly and can never believe or accept that Naren cheated on her.

Sonakshi tells him that she is his wife and will always support him. She wants to keep her marriage vows. It becomes a weak moment for Rohit, while Sonakshi becomes his strength. She advises him to reveal the truth to Veena so that Veena accepts the truth soon. She doesn’t want anyone else to break the shocking news. Rohit finally confides the entire truth in Sonakshi. Sonakshi proves to be the best wife and lover, by understanding Rohit’s unspoken feelings. She realizes that someone has overheard her conversation. She gets worried. Who is the mystery spy listener, is it Pari again or someone else who could use the truth against Naren? Keep reading.