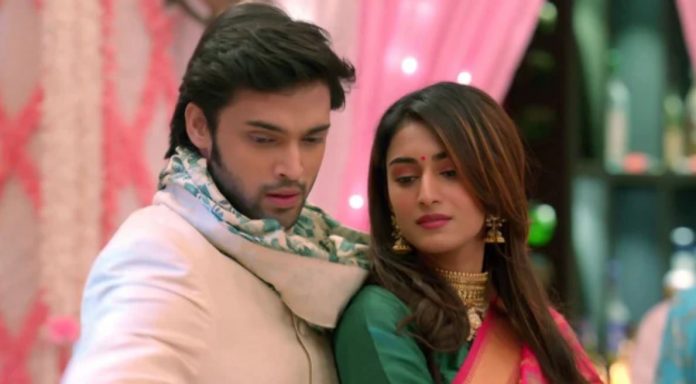 Kasauti Zindaagi Starplus Twists Tonight Anupre union Viraj and Prerna’s Tilak ceremony gets accomplished by Anurag’s hands. Moloy gets angry on Veena for hurting both Prerna and Anurag. Komolika is glad that Veena is herself hurting Prerna. She announces that Viraj and Prerna’s Tilak is done and now they shall look forward to their marriage. She asks them to dance in their ceremony to make a memory. Prerna refuses to dance with Viraj. He assures to be careful knowing she is pregnant. They have a romantic dance, while Prerna visualizes Anurag in him. Anurag finds her smiling and being happy with Viraj. He gets jealous. He goes away from Prerna.

He thinks what to do that his feelings are creating a storm in his heart. He gets a big relief when Anupam comes home. Anurag meets Anupam and tells him that he has an urgent matter to share. He tells Anupam that he missed him a lot. He shares his feelings for Prerna with Anupam. Anupam and Shivani are happy to know that Anurag still loves Prerna, despite the fact that he has no memory of the past. Anurag tells Anupam that he is feeling guilty to develop feelings for Prerna, when he is already married to Sonalika.

He blames himself for cheating on his wife. He feels miserable to be a bad guy. Anupam relieves him by stating his old relation with Prerna. He wants to tell Anurag that Prerna is his wife. He tells Anurag that Prerna is special for him. Anurag wants to know why. Nivedita warns Anurag against ruining Anurag’s life. He tells her that he understands Anurag’s state of mind and wants to free him from the guilt. She wants Anurag to be loyal towards his wife Sonalika. Anupam asks him then who is Prerna for Anurag.

She tells that Prerna is going to be Viraj’s wife now. Shivani wants to tell Prerna that Anurag loves her. She feels Prerna’s faith on her love has won. She thinks the good news will motivate Prerna to fight for her love. Shivani tells Komolika that Anurag has realized his feelings for Prerna, which means that they will unite. She tells that Anurag will regain his memory and then break Viraj and Prerna’s marriage. Prerna gets away from Viraj when she stops visualizing Anurag in him. Anurag joins Prerna on the dance floor.

They have a romantic dance which reminds him of the past moments. He tells her about the dream he has seen and shared with Sonalika. He feels that its important to share it with Prerna since he has seen her in his dream. He asks her about their bonding. She gets speechless. Viraj finds their bonding strong. Veena tells that they are best friends.

Viraj finds it strange. Anurag recollects Prerna and faints down by the stress. Prerna’s prayer get answered that Anurag starts recalling his past. The family gets the good news that he will get his memory back. Prerna gets pleased with the good news, while Komolika hatches a new plan to separate Anupre.

Best comment on Kasauti post by Komal Dorage:
I like the serial very much. actually I love it the character anurag and prena and the chemistry between them and unfortunately the entry of komolika, Mr. Bajaj and now sonalika I just hate them. I don’t understand that why they want to come in middle of two lovers.