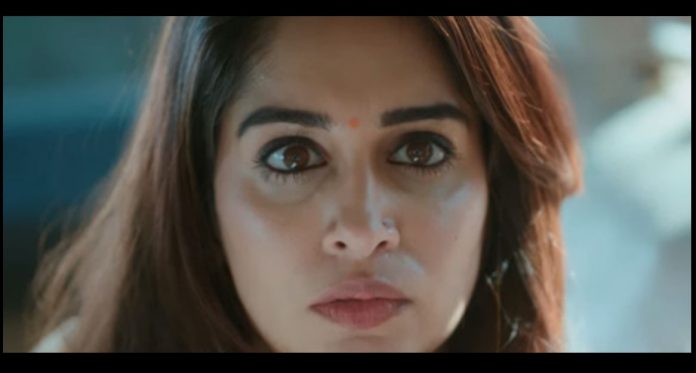 Kahaan Hum Starplus Stalker entry Sonakshi terrified There is a new entry of a dangerous stalker in Sonakshi’s life. Sonakshi witnesses a scary sight when she leaves from the house. She doesn’t get to see anyone. Next day, she goes for her shooting. She gets hindered by a procession. Shankar stops the car, while Sonakshi thinks the car will be ahead soon. She gets scared seeing the same stalker in the middle of the procession again. She identifies him as the same man she has seen outside the house at night.

The man reaches her car and sticks the blackmailing note, which states that he knows Naren’s secret that will get known to Veena and everyone soon. Sonakshi gets a deep shock knowing the secret is no more a secret. She had promised Rohit to keep the secret safe with her. She gets scared of the stalker. She gets another note which states her the location for the meeting. Sonakshi decides to stop the blackmailer at any cost. She reaches the isolated place to strike the deal. The man demands one crore to keep his mouth shut.

Sonakshi tries to catch him. The man tells her that he will reveal the truth, which may result Veena suffering from a heart attack. Sonakshi tries to stop him. He ends up hurting Sonakshi and flees from there. Sonakshi gets stressed. She can arrange one crore easily, but doesn’t think the blackmailing will stop after the first payment. She thinks to confide in Rohit about the blackmailing stalker. She doesn’t understand how the stalker learnt Naren’s truth, if he is related to Pooja’s real mother. She doesn’t want to lose Rohit’s trust. Will Sonakshi get blamed again for Naren’s truth leaking in Sippy house? Keep reading.

Reviewed Rating for this particular twist: 2/5 Unwanted in the track
This rating is solely based on the opinion of the writer. You may post your take on the show in the comment section below.

Sona gets blame always for no reason at all. Hope this time Sona takes Rohit in confidence n let him know bout someone blackmailing her.otherwise poor girl again will go thru the humiliations from sippy. That’s not fair. Somehow I feel this could be a conspiracy against Sona once again. Just like someone used her for Rani. Ronakshi can handle situation better.

Avi meets Rudraksh. He loses control on realizing her powers. He stays calm as much as possible. Raghav gives the credit of his success to his wife Madhuri. He misses Madhuri. He tells that Madhuri is no more but still with him. He gives the award to Avi, which makes Ratri jealous. Ratri introduces her boss Rudraksh to Avi and Raghav. Rudraksh gets greedy to snatch Avi’s powers soon. Raghav tells Avi that he is missing Madhuri a lot. Ratri reaches him and tries to get his attention. Avi ruins Ratri’s plans.

Ratri doesn’t stop chasing Raghav. Madhuri does some magic to keep Ratri away. Rudraksh tells Adrika that Ratri is falling for Raghav, her love is coming between her duty. He tells that Ratri is lying to them. Adrika assures that she will kill Avi. Adrika burns her house to take help from Raghav. Adrika and Ratri shed tears which makes Raghav offer them a shelter. Avi becomes the target of both the evil sisters.