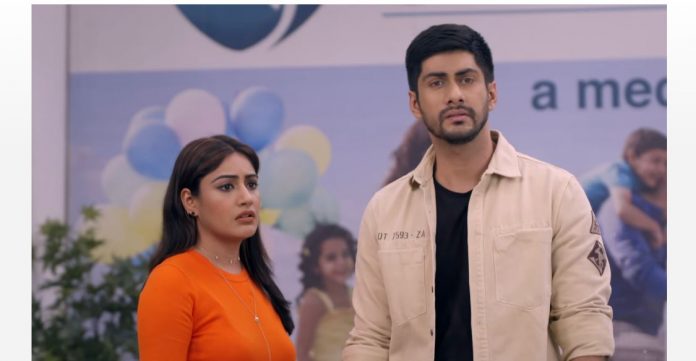 Sanjivani Dark revelation Sid Ishani in grave danger Vardaan goes to the ward to check if everything is fine. He doesn’t see Sid and Ishani there. Sid and Ishani knew of his coming and got hidden in time. Vardaan has done an atrocious crime to imprison the pregnant women to take their babies for his motives. He wants to sell the babies and put the blame on Anjali. He tells the women that very soon they will get free since their purpose will be fulfilled. Vardaan wants to frame Anjali into the scam, cleverly. Sid and Ishani overhear his planning. They can’t believe that Vardaan is targeting Anjali. They wonder what’s his revenge reason.

Vardaan tells that he will take Shashank’s revenge on Anjali by taking over Sanjivani. Sid wants to know why is Vardaan doing this. He feels responsible towards his elder sister Anjali. Ishani suggests that they inform the cops. Sid doesn’t think that would help, since Anjali will fall into trouble because of the evidences against her. He tells that Sid had cleverly plotted everything. He wishes that Shashank was alive with them. Ishani asks him not to get emotional and make a smart plan to counter Vardaan’s evil.

Sid decides to shift the pregnant women to a safer place. Vardaan gets the journalist to give the breaking news. He gives his statement against Anjali. He thinks Anjali will be landing in jail once the news is out. He makes huge claims and takes the journalist to the secret ward. He gets stunned on finding the ward empty. He wonders where did the women go and who helped them secretly. He understands that Sid and Ishani have flopped his plan. He gets too angry and swears to tackle them. Anjali doesn’t want to accept Sid as her brother.

Ishani asks Sid to give some time to Anjali. Vardaan fails to prove the scam. He goes to hire an assassin. He wants the assassin to kill either of Sid and Ishani and frame the alive person in the murder blames. Sid and Ishani secure the women. They tell Vardaan’s truth to Rahil. Rahil tells them that Vardaan will surely attack them. Ishani wants Sid to be alert. She knows that Vardaan will plan to harm them. Sid isn’t scared of Vardaan. Ishani tells him that they should alert Anjali about Vardaan’s plan. She tells that they have no proof against Vardaan, but they should take a chance. Sid agrees with her.

They try to meet Anjali and insist her to give them a chance to put light on the dark truth. Anjali gives them a chance when they tell about Sanjivani’s reputation at stake. They tell Vardaan’s ugly truth to Anjali. She gets into disbelief. She can’t believe that Vardaan can fall so low. Sid tells her that he has no proof, but he swears on his late father Shashank. He wants Anjali to believe him once. Anjali tends to believe Sid. The assassin tries to kill Sid and Ishani. Will Anjali take a step to save Sidisha and Sanjivani from Vardaan? Keep reading.