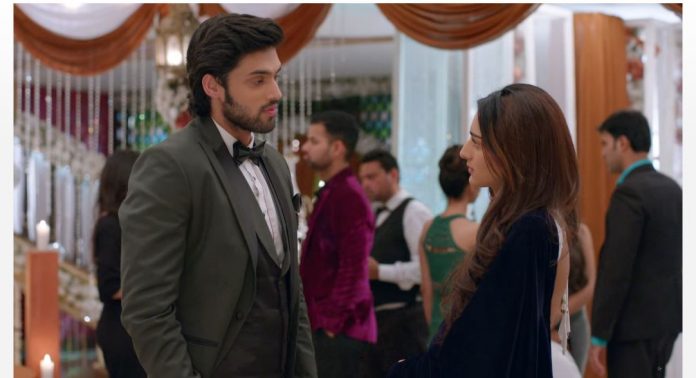 Kasauti Anurag Prerna union Komolika Viraj huge reaction Komolika can’t control her rage on hearing Anurag speaking about Prerna. Anurag can’t help, but ask everyone about Prerna and his past. She doesn’t want him to know anything. She gets biting her teeth in anger and goes away from Anurag, before he gets to see his mad side. She gets some medicine that would slow down his memory recovery process. She tells that she has worked hard to get the drugs from the doctor, by kidnapping his daughter. She had compelled the doctor to give wrong medicines to Anurag, which will disable his thinking strength and refrain his memory. She takes the medicine to administer to him. Ronit and his goons try to kidnap Prerna.

Ronit asks her to move her car, that’s causing the jam on the road. Prerna agrees to go out alone and check her car parking. Viraj hears her and stops her. He sends his driver for this purpose. He talks to her about his feelings. He tells that he wanted to break the marriage thinking of her feelings for Anurag. She admits that she likes Anurag. He thinks that she is just talking about friendship. He tells that Anurag is too caring and its obvious that she would like him. He professes his love and admits that he wants to marry her for his sake.

He feels she will complete his family. He is afraid to lose her. Prerna can’t believe this. She gets speechless. He asks her to think well and reply to his proposal. She wants to tell him that she just loves Anurag, who means her world. Komolika adds the medicine in water and sends it for Anurag. Prerna witnesses this. She gets saved from Ronit. She tries to save Anurag. She stops him from drinking the drugged water. Anurag suspects Ronit. Komolika sends Ronit before Anurag questions him more. Prerna consumes the drugged water.

Komolika thinks she is foolish to consume the drugs. She thinks of the drugs effect and laughs. She wants to see Prerna behaving intoxicated. She asks Ronit to get away and hire someone else to kidnap Prerna. Ronit’s goon ties up Shivani and goes on Ronit’s call. Shivani tries to get free. Anupam finds the waiter suspicious. He wants to alert Anurag. He thinks Anurag will be in tension. He thinks to protect Prerna himself. Anurag tells Prerna that he recalled stopping her from marrying a wrong man. Prerna understands that his memory is surfacing back.

He asks Mohini about the same incident. Mohini doesn’t think of Prerna and Navin’s marriage time. She tells Anurag that he never stopped Prerna from marrying. She thinks of Prerna marrying Bajaj by keeping Anurag in darkness. She expresses her dislike for Prerna. She tells that she isn’t interested in talking about Prerna. Viraj tells Anurag that he has proposed Prerna. He is awaiting Prerna’s reply. He looks for Prerna, while she gets intoxicated. She confesses love to Anurag. Anurag gets surprised, while Viraj gets a huge shock.

Best Comment by Komal Dorage:
I like the serial very much. Actually I love it the character Anurag and Prerna and the chemistry between them and unfortunately the entry of Komolika, Mr. Bajaj and now Sonalika. I just hate them. I don’t understand that why they want to come in middle of two lovers.