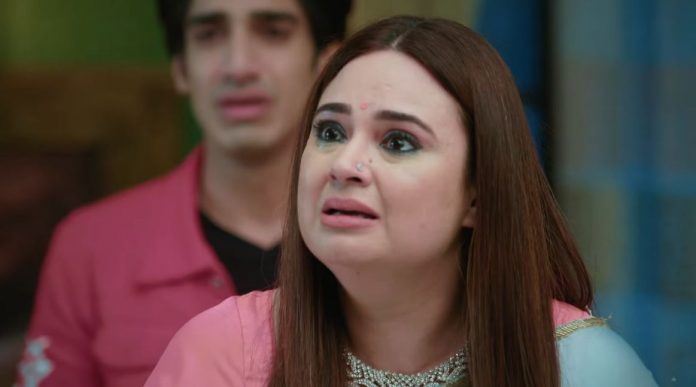 Kahaan Hum Starplus Veena dead for Rohit huge twists There are high points in the drama. Suman shocks Veena by proving the truth. Veena doesn’t want Rohit to swear on his wife. She senses that Suman is telling the truth, but is afraid to face it. Suman asks Veena to face the truth. She provides evidence of Naren’s blood donation to Pooja at the time of her suicide attempt. She tells that Naren and Yash had cleverly covered up the truth and Rohit helped them. She unmasks Rohit’s huge secret that he kept Veena in darkness to protect her from sorrow.

Veena didn’t expect this from Naren and Rohit. She loves them the most. She can’t take the shocker. She finds Naren speechless. Suman asks Veena how can she be so foolish to not know Naren’s huge lie. She tells that the entire family fooled Veena. Veena breaks down on understanding the big deceive. Rohit accuses Sonakshi for telling the truth to Suman. He feels that she cheated him and broke his family, when he trusted her so much. Suman leaves the Sippys to quarrel among themselves. She ruins their house peace and goes away.

Sonakshi defends that she didn’t tell the secret to Suman. Veena faints down, which worries the family. Rohit loves Veena the most. He hates Naren even more. Pooja starts hating Naren for his huge lie. She is indebted to Nishi and Yash, but can’t forgive them for the huge plan to get Rani as her real mother. Rohit rushes Veena for the first aid. Veena soon gets seizures. Rohit stops Naren and Sonakshi from helping Veena. He takes help from Yash and Nishi. He saves Veena in time by getting his hand hurt by her biting teeth during the seizures. He stabilizes Veena’s conditions. He wants to stay with Veena.

He asks the family to leave them alone. Sonakshi insists to look after Veena. Rohit lets Tanya stay back instead. He goes away for an argument with Sonakshi. He is unhappy and disgusted that she shared the secret with Suman. Sonakshi defends herself and tries to cure his wounds. He is very much sure that she shares all the personal secrets with her. Sonakshi tells him that she will find out the news source. He warns her against getting close to his family. Suman vents anger on Pari as well. Sonakshi rushes to Suman’s place to meet her and get an answer. Suman doesn’t get pleased to see her daughter.

She asks Sonakshi to leave if she is a Sippy. Sonakshi wants to know about the person sharing the big secret with her. Suman is hurt that Sonakshi doesn’t care for them anymore. She wants Sonakshi to support Pari, knowing Rohan is equally wrong to have an affair, despite being married. Sonakshi wants to react on Pari’s matter later, since her marriage is in trouble right now. She begs Suman to tell her about the person, who leaked Naren’s truth. Suman doesn’t care for Sonakshi’s tensions.

She asks Sonakshi to handle her in-laws and her marriage herself. Sonakshi gets disheartened. She doesn’t waste time there and returns back to Sippy mansion. Nishi and Yash are worried for Pooja. Naren wants to talk to Pooja. He thinks he must apologize. Rohit condemns Naren for being the root of all the problems. Naren accuses Sonakshi and Suman for breaking his family. Naren and Rohit taunt each other. Shockingly, Ajit falls in Sonakshi’s feet and begs for forgiveness. Sonakshi wants to know his next mistake. He reveals that he is the stupid person who told the truth to Suman. He tells that he was drunk that time.

She asks him how could he leak the family secret. He begs him to not tell Rohit about his mistake. Sonakshi assures him that she will not let him face the wrath. They rush to meet Veena on knowing Veena got conscious. Poor Veena gets in denial to avoid the ugly truth. She behaves normal like she was, some hours back. Rohit understands that she is in trauma and needs to come out of it. He slaps Veena to bring her out of trauma. He feels guilty for slapping his mother. He reacts so since he is a doctor and helpless to help her get rid of trauma. He apologizes to Veena.

He asks her to face the reality, the truth that Naren cheated her and Pooja is his illegitimate daughter. Veena tells him that she wants to live in the false world, since she has no courage to face it. She comes to terms with the reality. She criticizes Naren for his extra-marital affair. She reprimands the family for cheating her. She vents anger on Rohit who fooled her with the lie just to protect her from truth. She feels she has no one true. She wants everyone to leave her alone.

She ends her ties with Naren and Rohit as well. She didn’t expect Rohit to deceive her. She cries on her false world with Naren and Sippys. Rohit cries when Veena tells that his mum is dead for him. She doesn’t want to call him her son. Rohit shatters. Sonakshi wants to console Rohit, but he isolates himself. Sonakshi saves Ajit and accepts that she told Naren’s truth to Suman. Rohit shouts his hatred for Sonakshi, for breaking his mother, his lovely family. Will Sonakshi’s sacrificing lie break her marriage? Keep reading.

It’s really sad seeing Sona to get all the blame. Rohit looses his bad temper as usual and accuse Sona as well, not fair. Ronakshi were good before they were married. Why the makers chose the entire story will be based on family drama and Sona will fall into this blame game each time. Not nice at all. They should get over with this melodrama and take Khkt Ronakshi’s love life to the next level.