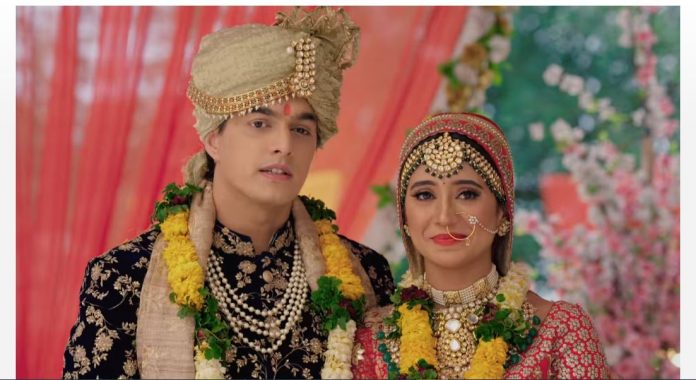 YRKKH Kaira married Lav Kush Love triangle begins The Goenkas are shocked to see Kamal in Kartik’s place. They ask about Kartik. Kamal gets to see Naira in Monica’s place. He learns about his big blunder in come in other wedding. Naira angrily demands an answer. He realizes that he met Kartik. He tells them about the short meet with Kartik at the Sherwani shop. He asks them to wait for Kartik, who would be on the way. Goenkas realize the unintentional swap and forgive him. They bless him, and wish him all the best for his marriage. Kamal makes a leave, while Goenkas await Kartik anxiously.

Kartik gets help from a motorist. He reaches the temple and is grateful to the man for helping him. He blesses the man to get married soon. Kartik arrives shouting Naira’s name. The family gets happy seeing him. Suwarna asks Kartik to tie up the sehra and cover his face. Kartik and Naira meet in the mandap. They don’t see each other’s face. Naira tells him that she was scared by the wrong things taking place in their marriage. Kartik tells that their marriage will surely happen. He apologizes to her. He promises to fix everything.

Dadi wards off evil sight and asks them to proceed for Jaimala rituals. Surekha asks them to wait until her sons come. Kartik assures that he will wait for his brothers to come, since he is excited to meet them after such a long time. Kartik praises his brothers. He tells Naira that they have grown up into cool dudes. Lav and Kush make a grand entry as the cool bikers. Lav is much naughty, while Kush appears sensible. Lav likes adventures and performs bike stunts with Kush. He wants to play pranks. He finds Trisha and pulls her dupatta. He tells Kush that it was too much fun. Kush disagrees. He doesn’t like troubling people.

Lav wants to just play around so that he can live his life with fun. He tells Kush that he didn’t harm the girl. They get calls from family. They want to rush to the temple. Trisha takes back her dupatta and lectures them. Naira hears their argument on the connected phone call. She tells Kartik that maybe there is a cross connection. Lav and Trisha get into an argument, while Kush tries to put a stop on it. Trisha tricks them to get free. She is also from Rishikesh and coached by Naira. She thinks its Naira’s teachings that she got saved from the nasty bikers.

She also heads to the temple to meet Naira. Lav and Kush decide to meet the family. Kartik and Naira think of arranging the garlands. They ask the pandit to give them the idol garlands so that they get blessings too. They have the Jaimala rituals and share a laugh. Kartik and Naira hug Kairav. Lav and Kush meet the family happily. They happily witness Kartik’s grand marriage. Pandit asks Naksh to do Kanyadaan, but Kairav steps ahead with a wish to do the rituals. Kairav makes the strong bond between his parents and does Naira’s Kanyadaan.

Dadi wishes that their marriage stays unbreakable this time. Kairav makes his parents take the marriage vows. Kartik and Naira take the final vow, that they will always think for Kairav’s happiness first. They want to look after the family, who always supported them. Kartik and Naira complete the sindoor ritual and get married. Kairav is happy for them. Trisha meets Naira and comes across Lav and Kush again. Naira realizes Lav’s mischievous prank.