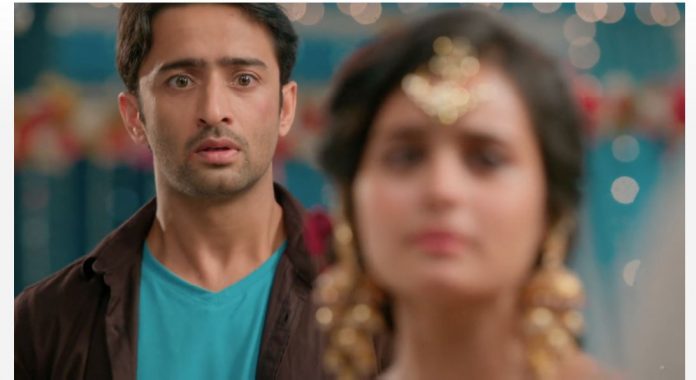 Rishtey Pyar Ke New Quest Abir Mishti love challenged Abir feels he has lost Mishti forever. Abir and Nannu have a fight for Mishti. Nannu jerks her away. This angers Abir. He shouts out his love for Mishti, since he can’t see her getting hurt. Vishwamber reminds him that he was the one who left Mishti and hurt her the most. He reminds how Abir had called off the marriage and broke Mishti’s heart. He tells that he wants a decision to be taken on the matter for a closure. He asks Mishti to choose either Abir or Nannu, knowing the difference in their promise keeping. He tells that Abir couldn’t keep his promise and failed to keep his word, while Nannu has always protected Mishti from sorrow.

He gives the credit of his family’s happiness to Nannu, who had agreed to marry Mishti and keep the family united. He asks Mishti to remember the hurtful past with Abir and see the prosperous future with Nannu. Mishti takes Abir’s name, which gives immense joy to Abir for a moment. She asks Abir to leave. Nannu calls Abir’s story over, since Abir is never meant to be with Mishti. Vishwamber warns Abir against creating any scene to ruin Nannu and Mishti’s marriage. Nannu sees Abir’s initials on her hand.

Mishti feels Abir got too late when she wanted him to accept her. Abir too realizes that he got late. He feels sorry that he didn’t keep Mishti’s expectations. Mishti doesn’t want to hurt her family. She can forgive Abir, but not herself if her family gets broken. Jasmeet is worried for Nannu. Kuhu and Kunal pacify Abir’s tears. Abir doesn’t want his story to end this way. He wants some way by which he can still win Mishti’s love. Kunal asks him to tell the entire truth to Mishti and end their misunderstandings. Abir’s Nanu takes him to the same park where Abir used to meet Mishti so that Abir can plan something to achieve his goals.

Nannu tells Jasmeet that he invited Abir in the function so that he can show Abir that Mishti will never choose Mishbir from now. He wanted Abir’s dreams and hopes to break, which he thinks eventually happened. Jasmeet tells him that Mishbir love is so strong that none can break it. Nannu is sure that Abir can never break Mishti and his relation. He wants to marry Mishti, against Jasmeet’s word. Jasmeet wants his marriage to be peaceful. She doesn’t think Mishti can bring that peace. Mishti cheers up Jasmeet, while Nannu is thankful to the former. Kunal tells Abir that Mishti chose her family like Abir chose his brother.

He encourages Abir to talk to Mishti. Mishti plans the rituals. Rajshri feels proud of Mishti. Mishti names Abir by mistake, which upsets Nannu. Rajshri is worried that Mishti isn’t able to forget Abir. Meenakshi finds Abir hurt. Abir tells her that she is the one who has hurt him the most. She doesn’t want to spare Maheshwaris. He tells her that her hatred won’t win this time. Rajshri takes advice from Devyaani on Mishti and Abir’s relationship.

Devyaani tells that Rajshri knows Mishti well and will decide the best. Mishti and Abir happen to meet at the same temple by destiny. Abir prays that his love story doesn’t end badly. He meets Mishti and Maheshwaris again. He gets a chance to prove his love once again.