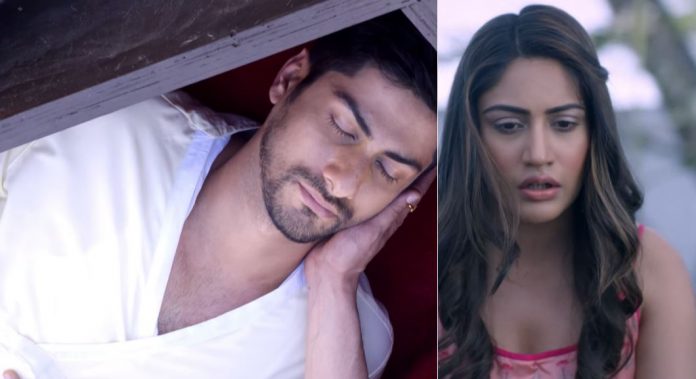 Sanjivani Ishani uncovers coffin Sidisha shocking meet Sid is admitted to Sanjivani. He has been sent from a crashed nursing home. NV gets too disturbed thinking of Ishani’s behavior. He didn’t know she will back out like this and freeze when the patient is lying on the operation table in front of her. He doesn’t want Ishani to run away from her duty. He is much hurt that his motivational speech didn’t help either. His secretary gets Sid’s file to him. He updates about the new patient. NV doesn’t check Sid’s details in the file. He is too upset on Ishani, who comes there to thank him. She wants to thank him for all his support, since Philo explained her that NV is a gem. NV doesn’t listen to Ishani.

He blasts his frustration on her. He tells her that he didn’t expect her to run away by leaving the patient waiting. He asks her to realize that she has cheated herself by cheating her duty. He asks her to value time, she has to get ready and come out of the fear cage. He asks her not to get too late that she repents later. He tells Ishani that he wants her to handle the new case. He gives her Sid’s file and asks her to better focus on the new case. Ishani makes a leave. Bebe meets him and finds him upset. He asks her if he has vented anger on Ishani once again.

He tells her that he is expressing his anger since he is a normal human being. He can’t understand Ishani’s problem when he is so much backing her up. Bebe asks him not to force Ishani. He tells that Ishani did not operate the patient and ran out of the OT. She tells him that he will need to give time to Ishani, he can just cure the wounds on her heart but he can’t decide when she will recover. She makes him understand that he shouldn’t be rude and apologize to Ishani. He doesn’t agree at first. He goes to meet Ishani.

Ishani misses to see Sid, who is getting a sponge bath at the moment. NV meets Ishani and feels sorry. He asks her to take time and not feel compelled. She realizes that he is feeling sorry. She thanks him for support. He asks her to carry on her work. Nurse Philo spots Sid before Ishani. She gets a big surprising shock. Bebe is much shocked and realizes that Ishani and Sid were in love. She recalls NV’s words. NV had decided to marry Ishani since he found her very true. Ishani had told NV about her past with Sid. Bebe wishes that Ishani, Sid and NV don’t meet.

She fears for NV’s heartbreak. Ishani misses Sid in Sanjivani. She comes across NV, who helps her once again. Ishani and NV learn about a patient buried in alive state. They rush to save the patient. They succeed to find the fresh burial and uncover the coffin. They realize that Sid is the patient and he is very much back in their lives. Ishani tells NV that he is Dr. Sid. NV realizes that Sid is Ishani’s ex, whom she couldn’t forget by now. He also knows that Sid is the reason for her depression. He decides to seek Sid’s help to normalize Ishani. There will be a love triangle in the show.