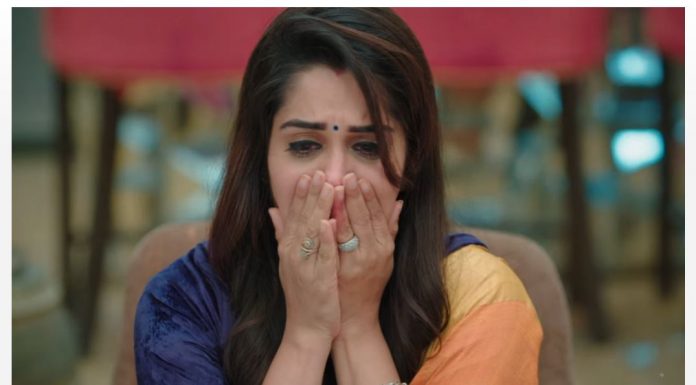 Kahaan Hum Starplus Alarming news stuns Sonakshi Veena questions Sonakshi about hiding about the pre-nuptial agreement from Rohit. Rohit wants to know what is it all about. Sonakshi gets worried when she gets accused for being greedy and hiding her motives. Sonakshi tells Rohit that Naren wanted her to sign the agreement before marriage for ending his doubts. He asks her why didn’t she share it with him, when she always wanted him to share the matters. She tells him that she didn’t wish to hurt him. She doesn’t think the agreement has anything wrong in it. Rohit reads the agreement which states that if Sonakshi divorces Rohit, then she is entitled to get major share of Sippy property.

This stuns Rohit and his family. Sonakshi is the person who is much shocked, since she didn’t sign any such agreement. She tells Rohit that the agreement didn’t state this clause. She tells him that Veena and Sukhmani are the witness, while Yash has himself made the papers. Veena and Yash tell that the papers were different. Sonakshi tells Rohit that she didn’t sign the papers to claim the property, she didn’t want anything from Naren and gave him an assurance. Veena accepts that Sonakshi didn’t sign the papers. Rohit tells that Sonakshi has demanded a huge monthly maintenance too. Veena gets puzzled.

Nishi frames Sonakshi by telling the family that Naren had given the papers to Sonakshi, which she changed and signed to win his trust. Sonakshi doesn’t want to accept the wrong blames. Nishi tells her that if she didn’t swap the papers, then Suman would have done this. Rohit is aware that Suman was interested to know about his property, she wanted his richness. He blames Suman for changing the papers and fooling them. Sonakshi doesn’t think Suman would do this. She clears the matter to them. She asks Veena and Rohit to believe her. Veena loses her thinking power. Rohit loses faith on Sonakshi. He feels that she isn’t the one whom he loved.

He tells that his dear Sonakshi wasn’t the one who ran after money. He regrets that her truth has come out shockingly. He tells that he is failing to relate to her new side. He asks her why did she break his heart, if she will ask for divorce now. Nishi tells Rohit that Naren was right, since actresses have no ethics. She asks Sonakshi if she is going to file for divorce. She threatens to call the police. Sonakshi asks them to call the police, since she also wants to know the truth. She fails to know about the conspiracy. She tells that police may help her.

Rohit stops Nishi from calling the police. He is tired of the filmi drama. He tells Sonakshi that his family isn’t like her tv serial. Sonakshi has hopes that everything will get fine. She gets the inspector’s call and rushes for the meet. Inspector gets a new lead in the form of Naren’s friend and lawyer, Mr. Hirani. Sonakshi identifies Hirani and learns that Naren spoke to Hirani just before his accident. Inspector tells her that they got to know the details from Naren’s call log. Hirani tells Sonakshi that Naren spoke to him and was happy that his Bahu Sonakshi is thinking for the entire family.

He adds that Naren was going to change his will because of Sonakshi’s word. She gets surprised. She didn’t expect this from Naren. Sonakshi gets a clean chit. Inspector tells her that he believes her innocence. He shocks her by giving the alarming news that Naren didn’t commit suicide, it was a murder attempt. He proves it to her by a logical explanation. Sonakshi can’t believe this that the murderer is in the family. Inspector asks her to help him find out. She doesn’t want him to discuss this with the family. He doesn’t want to alert the murderer. He asks Hirani about the second executor of the Sippy property.

Hirani reveals that Naren was the prime inheritor, while Nishi was the second executor. Inspector suspects Nishi, but Sonakshi clears Nishi’s name. She doesn’t think Nishi can do this, since Nishi loves Naren a lot. Meanwhile, Nishi meets Naren. He is in coma. She tells him that Sonakshi is soon going to get out of Rohit’s life. She reveals her evil plan to break up Ronakshi. She feels bad for Rohit. She wants Naren to die soon so that she gets her property soon. Sonakshi misses Rohit’s support. He is also troubled by the inner conflicts. He wants to trust Sonakshi by going against the evidences.

Rohit feels Sonakshi has killed their lovely relation by stabbing his faith. He didn’t expect them to face this day. He accuses her and angrily demands divorce from her. Sonakshi has no option than to turn bad in his eyes in order to stop the divorce. She demands the share in property. She keeps her conditions to limit Rohit’s thought for divorce. Rohit gets stunned by her big demand.

You need to stop this stupid melodrama with the twists and turns. Its not fair that Sona has to get blamed for every single thing! Where’s the love? Where’s the happiness? First of all, Nishi should go prison and Ajit needs to to tell the truth! Simple as the drama needs to be more calm and more with the family love. Sona to be proven innocent. If this twists and drama doesn’t stop then I will be one of the fans to stop watching the show and I am 100% sure KHKT will lose its viewers full stop!