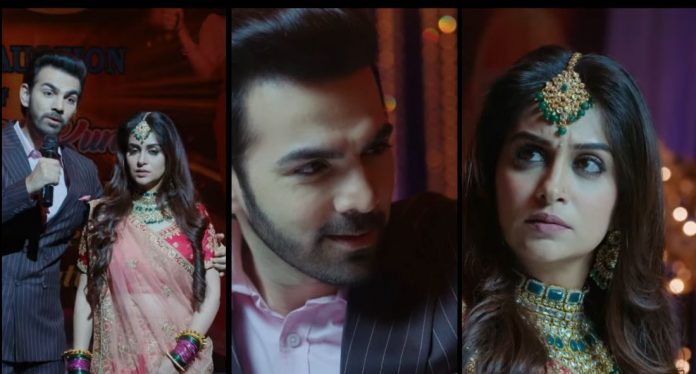 Kahaan Hum NEW Rohit shaming act shocks Sonakshi Rohit and Sonakshi’s relation loses hope. Rohit is frustrated on himself for his mistake to marry Sonakshi. Sonakshi shares the shocking happenings with Sumit. Sumit can’t believe that someone had tried to kill Naren. He asks her if her family isn’t a normal one. He finds her in-laws very much similar to their family in the KPK show. He sympathizes with her. He tells her that she should tell Rohit about the person conspiring against her. She tells that police is suspecting Nishi. He asks her not to lose Rohit’s faith completely, he should be aware of the latest updates on Naren’s case. Sonakshi also thinks she should tell Rohit about the inspector’s plan.

Soon, Netra meets them. She tells them that since they are Kunal and Parvati for their fans, they have to attend the channel celebration and charity event and auction their show costumes to contribute to the orphanage. Sonakshi tells Netra that Naren is in the hospital and Sippys are facing a huge low. She doesn’t want to attend any party that would send a wrong message to her family. Netra understands her concern, but still insists her to attend the event. Sumit tells Sonakshi that this maybe a chance for her to talk to Rohit and convince him.

He asks Sonakshi to get Rohit to the event. Sonakshi doesn’t think that Rohit will agree to her. Netra tells that the young kids’ blessings and wishes can help Naren recover soon. Sonakshi agrees to attend the event. Sumit wishes her all the best. Sonakshi looks for Rohit at home. She remembers that Rohit goes to the secret place when he is too worried. She goes to the park and finds Rohit there. Rohit is dealing with much stress because of his marriage to a tv actress. He never thought he will regret for his marriage decision.

Sonakshi wants to talk to him. She falls in danger, but he saves her. She asks him to let her die if he doesn’t trust her. He doesn’t want to hurt her. She asks him if he lost all his faith on her. He removes the bracelet, which signified their friendship. He tells her that there isn’t any trust between them. Rohit hurts her heart. He throws away the bracelet down the cliff. She weeps. Rohit rushes home to throw her stuff out. Sonakshi reaches home and finds him in angry mode. He accuses her for stabbing his faith and suffocating their lovely bond by her lies and cheat. He wanted her to be loyal towards his family.

He tells her that she has killed their relationship and he doesn’t want to stay with her from now. He asks her for divorce shockingly. Sonakshi gets helpless to ask for the property share to stop him. Rohit gets stunned by her sudden claim. He calls her greedy and selfish. She accepts all his blames. She doesn’t want her relation to break. She accepts that she is a greedy woman running after his money. She asks him to give his property as per the prenuptial agreement. She tells him that she has self-respect, she will not tolerate his misbehavior if she loves him. He swears to ruin her life. She tolerates his anger.

Yash witnesses this and pities her state. He tells her that he trusts her and doesn’t think she deserves such kind of ill-treatment from the family. He wants at least Rohit to believe her. He asks why is she tolerating this if she can walk out. She tells him that she loves Rohit immensely and wants to keep his faith. She doesn’t want Rohit and her marriage to end badly. She knows Rohit’s tensions and sorrow. She tells him that Rohit is more hurt than her. She doesn’t want to leave Rohit. Yash respects her decision. She is sure that Rohit will soon realize his mistake. She learns that Rohit is suffering from fever. She gets worried for him.

Rohit wants the entire family to stay with Naren turn by turn. He doesn’t involve Sonakshi. He tells that he doesn’t think she is family now. Rohan fakes concern for Tanya, to avoid the divorce. Veena is glad to find Rohan caring for Tanya. Sonakshi asks Ajit to check Rohit’s temperature. Rohit doesn’t want Sonakshi to do any new drama. Rohit goes to meet Veena. Sonakshi catches him and expresses her concern. Rohit’s anger gets higher. He attends the charity event with Sonakshi. He gets unexpected to insult his wife publicly. He turns bitter tongued. He accuses Sonakshi for ruining his life. How will Sonakshi handle the new problem? Keep reading.

It’s sad to see how Rohit lost his trust in his love Sona. At least Sona tried to explain him for the first time instead being quiet and instead taking all blame on herself, looked like Rohit is in shock and confused state to even think rational at this vulnerable point where he stands. Can’t see Ronakshi drifting away. Hope Sona can clear her name from the mess soon and bring the real culprit upfront.