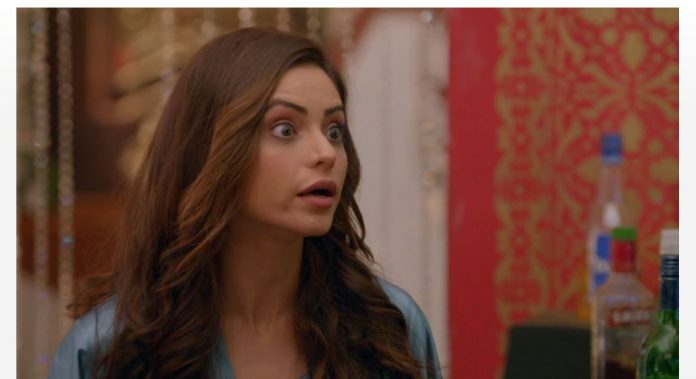 Kasautii Expected outcome Komolika huge accusation Komolika is worried that Jagga may name her and put her in trouble. Anupam guards Jagga. He feels sleepy. He wants to take a short nap and come back soon. He goes to sleep and gets scolded by Nivedita. She is angry that he never listens to her. She makes him sleep on the couch. He thinks of Moloy’s good fate, since Moloy bears Mohini’s anger and still stays cool. Komolika checks if Anurag really slept. She thinks he won’t wake up till morning. She silently goes to Jagga. Jagga gets conscious and realizes that he is in Basu mansion. He recalls that he fainted at the cliff. He thinks Anurag might have caught him and brought him home to know the truth.

He wants Komolika to come and free him. Komolika meets Jagga and threatens him so that he doesn’t tell her truth. Moloy gets a glimpse of her and gets confused. She hides from Moloy. Komolika tells Jagga that she will kill him. He tries to convince her to let him go. He wants to save his life. She tries hard to kill him. Prerna wakes up by the disturbing sound. She rushes to see if Komolika is up to something again. She goes to see and receives a shock on finding Komolika in her evil avatar. Komolika catches Jagga to stab her.

Prerna shouts to Anurag and breaks his sleep. She wants him to come downstairs and stop Komolika. Anurag breaks out of his sleep on hearing Prerna’s loud call. He runs to Prerna. The family members wake up and come to see why is Prerna shouting. Komolika tells Anurag that she was doing self defense, Jagga was trying to harm her. Jagga takes Komolika captive and threatens of killing her if Anurag tries to catch him. Anurag asks him to leave his wife. She asks Jagga to just catch Prerna and kill her. She pushes Prerna and makes her fall in danger again.

She wants Jagga to just kill Prerna at once. Jagga tells that he will be killing Prerna in front of them. He tries to stab Prerna and kill her baby too. The Basus fear the worst and are in shock. Anurag timely rescues Prerna. He stops Jagga from harming Prerna. Veena gets restless that Prerna is in danger. She tells Suman that Prerna isn’t fine. She asks Suman to take her to Basu house. Suman and Veena rush to meet Prerna. Anurag beats Jagga violently and vents all his anger. Prerna cries in pain. Anurag threatens Jagga to get the truth out of him. He calls the police and asks Jagga to tell the truth.

Jagga tells them that Prerna always knows the truth. Anurag gets surprised to hear this. He wants to know who is behind Prerna’s miseries. Viraj finds Anurag too concerned for Prerna. he again feels that they love each each. Their bonding proves it every time. Prerna wants Jagga to tell the truth to Anurag. She admits that she knows the culprit, but doesn’t want to name. Jagga signs towards Komolika shockingly. Anurag and Mohini get into disbelief. Komolika fears that she will be badly caught up this time. Will Jagga really expose Komolika or point towards Prerna or Veena to blame? Keep reading.