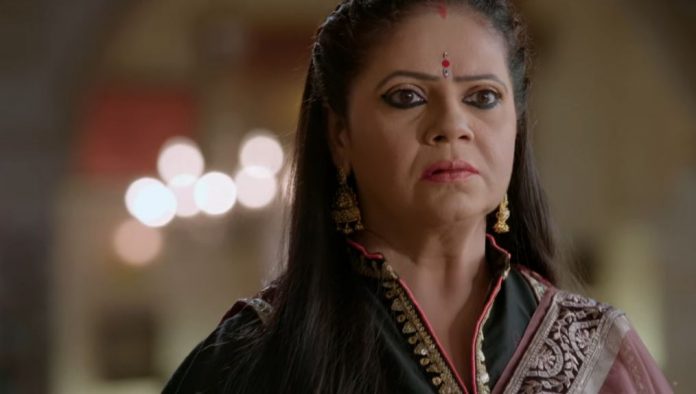 Rishtey Starplus Unexpected Meenakshi stunning declaration Mishti and Abir meet and unite. They have their much awaited love confession, on the bus rooftop. Mishti rebels to win her love. She has saved Abir’s life by giving him a new hope. Meenakshi fails to reach Abir before Mishti. She realizes that Mishti has saved Abir. She changes her mind. Mishti had eloped from her wedding and went against her family just to save Abir. She tells Vishwamber that she loves Abir a lot, she doesn’t regret to accept her feelings. She apologizes to Nannu. Nannu demands her to come with him for the marriage. Abir holds her hand and doesn’t let her go.

Mishti tells Nannu that she loves Abir and can’t marry anyone. Nannu gets much angry when she rejects his love. He realizes that Mishti and Abir’s love is strong and defeated him. Nannu vents anger around. Abir asks Nannu not to compel Mishti. She chooses Abir’s love over Nannu’s friendship. She wants to follow her heart. She asks Maheshwaris to free her from the commitment. She tells Nannu that even if she marries him, she will never be able to love him. She doesn’t want to do injustice with Nannu.

She tells that he doesn’t deserve a loveless marriage. She tells them that she doesn’t know Abir and her future, if Meenakshi will accept her, but she can’t marry Nannu. She wants to leave from their lives. She feels guilty.

Nannu asks Mishti not to go away from the family, he will go away. Rajshri supports Mishti. Meenakshi takes Mishti and Abir to the temple. She apologizes to Vishwamber. She swears on the Goddess. She promises Vishwamber that if Mishti becomes her bahu, then she will ensure that Mishti stays happy forever. She asks for Mishti’s hand for Abir. She asks Vishwamber and Rajshri to accept the alliance.

Vishwamber accepts the alliance. Mishti and Abir’s love wins. Abir is in disbelief with Meenakshi’s shocking move. He suspects her intentions. Later, Meenakshi apologizes to Abir and tells him that she will accept Mishti for the sake of his happiness. She accepts her crime to give the idea of faking drunk state to Nannu. She tells that she joined Nannu’s hands to keep Mishti away from Abir. She tells that she will heartily accept Mishti now.

Abir knows she can never change. He doesn’t believe her. He wonders how did she get a change of heart. Meenakshi tells him that Mishti saved his life twice and proved her love. She accepts Mishti’s goodness. Meenakshi declares her decision to get Mishti and Abir married. Good times finally arrive for Mishbir.