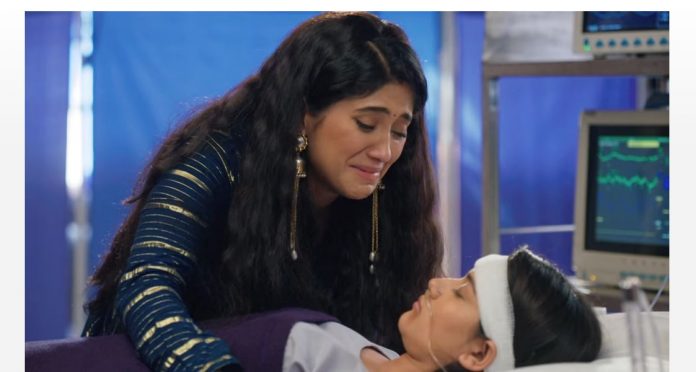 YRKKH Naira accuses Lav Kush Goenkas family chaos Naira gets too worried for Trisha. She wants Trisha to recover from the comatose state. Kartik gives strength to Naira. He assures that he will catch the culprits who are responsible for Trisha’s accident. Kartik and Naira return home with upset sorrowful faces and tell the family about Trisha’s condition. Goenkas pity Trisha, who is an orphan. Naira tells Surekha that Trisha isn’t an orphan, since she has taken up Trisha’s responsibility. Surekha doesn’t want Trisha’s matter to bring any problem in the family. Naira stays disturbed thinking about Trisha. The doctor informs Naira about the pendant found with Trisha in her clothes.

She sends a snip to Naira for her to identify the culprit and seek help from the police. Naira suspects the pendant to be of the culprit. She finds Lav’s friend Abhishek with the same pendant. She suspects him. Naira starts spying on Abhishek to know about his involvement in Trisha’s molestation case. Soon, she overhears Lav and Kush’s conversation about Trisha. Kairav tells Naira about spotting Lav and Kush burying something in the phone. Naira gets suspicious that Lav and Kush are also involved with Abhishek. Naira raises the objection on Lav and Kush. Surekha creates a huge drama.

She defends her sons and asks Naira not to blame them. She tells that her sons can be mischievous, but they aren’t criminals, they can never molest a girl. She shows her belief on Lav and Kush. Akhilesh yells at his sons a lot and scares them. Lav and Kush get tensed seeing the family tension. They don’t want their crime to get know. They wanted to teach a lesson to Trisha because of their ego. Lav wants Kush not to confess the crime.

Naira tells Kartik that she will not spare Lav and Kush if they are at fault. She asks Kartik to support her against her family. Kartik assures to support the right person, who is Trisha in this case. He wants Lav and Kush to realize their crime. There is a huge chaos in Goenka house. They are troubled in a fear that Lav and Kush are really the wrong doers.

Reviewed Rating for this particular twist: 3/5
This rating is solely based on the opinion of the writer. You may post your take on the show in the comment section below.