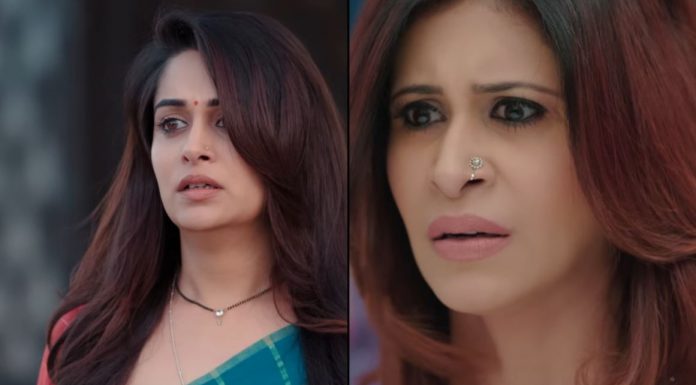 Kahaan Hum Starplus Sona attacked Huge revelation Sonakshi notices Yash and Nishi. She doubts on Nishi. Nishi eats the food by her right hand. Sonakshi gets confused seeing her. She doesn’t find anyone suspicious. She doesn’t know who has forged her signatures. She sees Vimmi working with left hand. She rudely questions Vimmi about meeting Naren at the time of his accident. Vimmi gets worried knowing Sonakshi is doubting her. She tells Sonakshi that their relation is since long, like a devotee and Goddess. She feels much sorrowful. Sonakshi apologizes to her and tells her that she is much stressed.

She tells that Rohit isn’t talking to her and this is troubling her even more. She has to find the truth some how. She wants to know who forged her signature and framed her in Naren’s suicide case. Vimmi tells her that she is illiterate and can’t work hard to forge her signature. Sonakshi realizes that the culprit would have worked hard, practiced to forge the signature. She asks Vimmi about the garbage. Vimmi helps her and takes her to the garbage bags dumped in the backyard. She tells that the bags are sorted and named according to all the rooms.

Nishi amazes Yash by using both her hands so efficiently. He praises her skills. She tells him that she can work perfectly with both her hands. He mentions that she signs all her cheques and does writing work with her left hand. She prepares to go to the hospital. On the other side, Rohit thanks Tulsi for bringing coffee just when he needed it. She tells him that Sonakshi had called her and asked her to hand over a cup of coffee to him. She calls him a lucky man to get such a caring wife. She tells that Sonakshi is much concerned for Naren and family.

Rohit vents anger by dumping the coffee. He soon learns his patient Preeti is critical. He rushes to check Preeti. He examines her well and wants to send her for tests. Preeti refuses and makes a request that she wants to meet Sonakshi. Rohit doesn’t want to talk to Sonakshi. Preeti and her mum insist him to call Sonakshi. He gets helpless and calls Sonakshi. She gets busy in finding the clues. He feels she isn’t answering since he had insulted her in front of the media.

Sonakshi quickly searches for some clue. Vimmi and Sonakshi together hunt for evidence. Sonakshi luckily finds the paper on which she spots her signs. She joins the paper and finds the letterhead on Nishi’s name. She is much puzzled. She doesn’t think this can be true. She can’t believe that Nishi is behind it. On the other hand, Suman reprimands Pari for calling off the alliance with Viren. She asks Pari if she is still thinking about Rohan. Pari hides about her pregnancy. She tells Suman that Viren isn’t a nice guy, she doesn’t want to marry him.

She swears to make Rohan plead her for marriage. She wants Rohan’s baby to do the needful and break Rohan’s marriage with Tanya. Sonakshi goes to Nishi’s room by hiding. Nishi and Yash are away. Sonakshi wants to find more clues and confirm her doubt. Sonakshi begins her extensive search. She recovers the letter pad and pen. She finds the same letterhead with Nishi’s name. She realizes that Nishi is the one who is behind it. Her suspicion goes on Yash as well. Nishi and Yash happen to come back to the room, but miss to see her.

Sonakshi leaves silently, but Yash spots her. He questions about her coming. She makes an excuse to rush out of the room. Yash doesn’t doubt her. Sonakshi goes to meet the inspector. She gives the evidences she found.

He tells her that either Nishi or Yash would be the culprit. Sonakshi tells him that Nishi loves Naren a lot, and Yash also loves the family a lot. She doesn’t think they can try to kill Naren. Inspector asks her to stay alert and find out who is a left hander. Sonakshi wants to go home and continue her investigation. She wants justice for Naren. She also wants to clear her name. Nishi realizes that someone had been checking her room. She asks Yash about the visitor. Yash tells her that Sonakshi had come to their room. Nishi understands that Sonakshi is spying on her.

She loses her cool and goes to confront Sonakshi. Nishi attacks Sonakshi. She pushes Sonakshi with her left hand while denying the blames. Sonakshi realizes that Nishi had pushed Naren the same way by her left hand. She catches Nishi red-handed and rebukes her disgusting move.

Best Comment by Jazz:
Wow Sona is finally confiding in Rohit. Sippys still would not believe Sona that’s for sure. Hopefully Ronakshi together can go on a mission to prove Nishi’s conspiracy against Sona. I hated when Akash, Rohan and rest Sippys went against Sona.