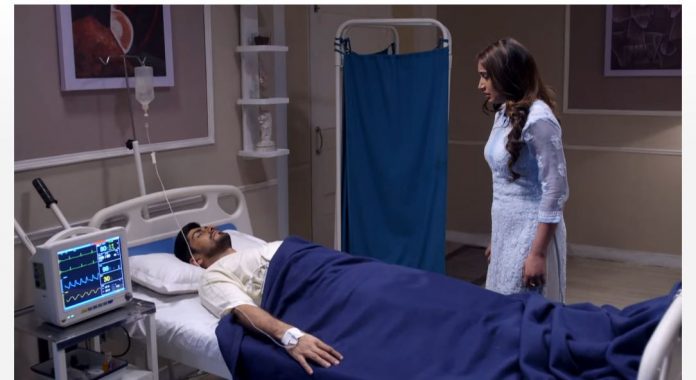 Sid Ishani critical Sanjivani moment NV selfless act Ishani feels compelled when NV tries to adorn her on the guests’ insistence. NV knows that she isn’t comfortable. She wants to avoid it. He also wants to call off the rituals and get away. The guests insist him for continuing the rituals. He tells Bebe that Ishani won’t be liking it. Bebe is also helpless since she doesn’t want their marriage truth to come out. Ishani recalls the good old times with Sid. She is affected by his presence in her home. She doesn’t want to see Sid. She gets too disturbed and stops NV from putting the nuptial chain in her neck.

She runs away from there abruptly. Bebe manages to handle the guests well by stating about Ishani’s work stress. Ishani breaks down. She didn’t wish to see Sid ever in her life after his big deceive. She doesn’t express her pain to anyone. Ishani ruins her room in a fit of rage. She is too frustrated. She wants to vent out her emotions that’s controlling her heart. NV understands her emotional outburst. He wants to leave her alone so that she can find some solution to deal with her sorrow on her own. He recalls his marriage vows to her. He wanted to be with her in joy and sorrow. He wants to give her freedom to think, analyze and overcome the sorrow phase.

He feels sorry for her. He has seen her in depression since long. Ishani apologizes to him. She cries for hours. He wants to support her all her life, but wants to motivate her to fight. He is equally sorrowful. He gets drinking. Bebe joins him. She asks him not to force Ishani to treat Sid. She doesn’t want Sid to spoil their lives. NV tells her that he isn’t adamant to hurt Ishani, but to treat her pain. He tells that he is just trying his best. He tells that Ishani’s tears flow will cure her wound. He wants her to face Sanjivani and also Sid, which will make her recover soon. She asks him if he has realized that he may lose Ishani to Sid if they patch up.

He doesn’t think of losing her. He wants her happiness and peace. He is selfless and wants her to move on in life. She warns him against ruining his own life while uplifting her. He tells her that he will be okay. She finds him a gem at heart and blesses that he stays happy. He tries to help Ishani in getting a good sleep. He keeps scented flowers under her pillow so that she gets good sleep with the help of the aroma. Ishani goes to see Sid. She cries a lot. NV finds her facing her wound. He wants her to get better by accepting the reality.

NV thinks its time for Ishani to react and act like a doctor. NV informs Rahil about Sid’s shocking state. Sid gets sinking. His pulse drops in the state of comatose, which becomes a huge matter of concern. Rahil tells Ishani that Sid is sinking. Ishani worries with the thought of losing Sid forever. NV wants Sid to get fine and give answers to Ishani’s questions so that Sid helps Ishani come out of her depression. NV is ready to do anything to save Sid. Will Ishani act like a doctor and save Sid? Keep reading.