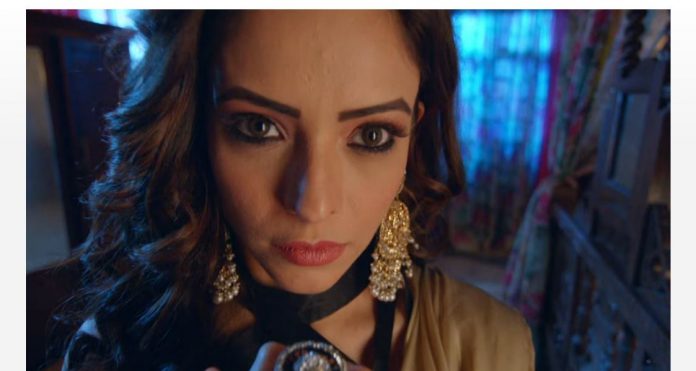 Anurag Prerna Kasautii Zindagi Starplus Highlights Today Viraj meets Prerna and her family. He tells Veena that he tried hard to catch Jagga, but missed, and got hurt in the process. He assures that he will always protect Prerna after marriage. He hides his vicious intentions of killing Prerna. Prerna doesn’t know if she is doing right to cheat Viraj and letting the functions proceed. She is stressed for the engagement function due on the next day. Viraj gives her engagement dress sent by his mom. He tells that he will take good care of Prerna and her child. Veena is glad that Prerna got a good life partner. Prerna takes some rest. She cherishes the moment when Anurag made her wear the ring.

She misses him. When he suddenly appears in her room, she realizes that he has taken the balcony route as before. She wishes that he remembers the past. She asks him the reason for coming this way. He tells that he wanted to save her from questioning by removing the ring stuck in her finger. He apologizes and gets busy in removing the ring. The ring doesn’t get off. She tells him that she has no problem to wear his ring. He asks her to wear it till her engagement. He doesn’t want to hurt him. He goes away to prepare for her engagement function. Komolika enquires about Anurag’s medicines. She learns that Anurag is taking the medicines.

She gets happy that he will never recall his past. She thinks to trap Debu in the matter if Anurag learns about the drugs. Anurag gets some gifts packed. He rushes to Prerna’s house. Komolika spots him. Mohini and Nivedita discuss about Anurag and realize that Anurag didn’t go to the office. They know he has gone to Prerna’s house. They see Komolika and tell her that Anurag has a big heart, he is really keeping his word and doing the best for poor Prerna. Komolika asks them not to lie, she knows there is something between Prerna and Anurag, Prerna is snatching him. She wants to go to Prerna and stop her. Mohini feels embarrassed. Anurag meets Veena and gives the gifts.

Veena wants Prerna to know the reality, that Anurag will never recall his past. Prerna wants Anurag to recall her. She doesn’t understand why he isn’t recalling anything after the doctor’s positive word. Shivani asks her to have faith on Anurag and their love. Veena asks Anurag to hand over the dress to Prerna. He agrees. He meets Prerna’s Dadi, who tells him that he has married Prerna. He gets stunned. Veena tells him that Dadi forgets things a lot of times, he shouldn’t take her words seriously. Anurag thinks Dadi doesn’t remember Prerna’s husband.

He goes to Prerna and tries to help in fixing a bulb. He gets an electric shock. They have a moment when she cares for him. He gifts her a dress. Komolika meets them and questions Anurag for not informing her about his leaving. She tries to embarrass Anurag intentionally. Prerna wants Komolika to leave. Komolika clears that Anurag will always be with her. Prerna shows off her ring and tells that Anurag gifted it. She makes Komolika jealous. She claims that Anurag is just of her. She has a belief that Anurag will remember her and stop her marriage with Viraj.

Komolika doesn’t want to delay a bit. She decides to kill Prerna on the engagement day itself. She informs Viraj that the marriage plan is cancel. Prerna falls in danger when Komolika plans Prerna’s accident.