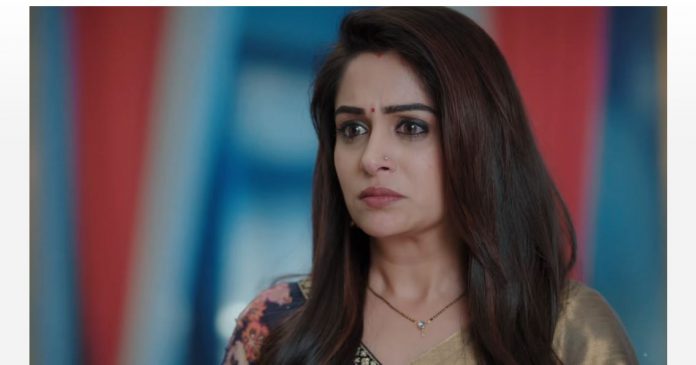 Kahaan Hum Shocking Infidelity slap on Sonakshi Sonakshi awaits Rohit at home. He is also big time relieved to know her innocence. He confronts Nishi for her crime. He has seen the video and got to know her heinous crime, which he would have never believed. He tells her that she is so evil that he feels ashamed to call her Bua. He reproofs her shameful act. She didn’t wish Rohit to know about her crime. But, when her truth comes out, she decides to play it open. She tells Rohit that its good that he got to know everything, since she won’t be faking goodness in front of him.

She wants him to know her limits. Rohit swears to expose her truth in front of Sippys. She threatens him about Naren. He doesn’t realize what she is up to. She gets her phone to control Naren’s pacemaker. Rohit learns that Naren is critical. Doctors try to help Naren. Veena tells Rohit that Naren was fine some time back. Nishi shows fake concern for Naren. Veena tells that Naren suddenly got critical. Naren is declared dead by the doctor. Rohit revives Naren by the shock therapy. He doesn’t know that Nishi had turned Naren stable. He asks Veena to take care of herself. Veena wants to be with Naren.

Nishi tells Rohit that she has shown the demo of her limits, she can kill Naren right away by using the pacemaker control app. She reminds him that he had fixed the pacemaker after performing Naren’s heart surgery. Rohit realizes the threat on Naren’s life. He warns her against harming his family members. He loves everyone dearly.

He doesn’t want Nishi to kill anyone for her selfish purpose. She tells him that she isn’t sparing Naren, then he may imagine that she can do the worse with Sonakshi, whom she hates a lot. He tries to snatch her phone, but fails. He asks her demands. She asks him to keep her truth a secret. She wants him to break his relation with Sonakshi and throw her out of the house. She had challenged Sonakshi about making Rohit oust her. She wants to win the challenge.

Sonakshi calls him. Nishi asks him to talk to Sonakshi and inform his decision to make her out of the house. He feels much guilty to not believe Sonakshi before. He takes the call. Sonakshi asks him to forgive Ajit and not reveal anything to family. She wants peace in the family. She expresses love and calls him home.

Veena gets the divorce papers prepared by Deepa. Nishi reminds the clause. Deepa tells that she has added it, but its risky since Rohit may refuse to sign. Veena knows how to convince Rohit, since Sonakshi has failed to prove her innocence. In her fragile minded state, she meets Rohit and emotionally blackmails him. She asks him if he loves her more or his wife. He tells that Veena is most important for her. She asks him to divorce Sonakshi and oust her from family.

He gets a huge shock. He was happy that Veena loves Sonakshi. He tells that he has married Sonakshi, he can’t leave her. She tells him that Naren is in this state because of Sonakshi, she is playing with their family and ruining them. She tells that Sonakshi is blaming Nishi, which isn’t acceptable. Rohit wants to tell her about Nishi. He defends Sonakshi. Nishi intervenes to threaten him. He gets compelled by Veena to sign the papers. Nishi asks him to read the clauses. Rohit tells that it doesn’t matter, since divorce is itself a big pain. He is much upset when Veena also threatens of ending their relation. He feels his life is ending.

He signs the divorce papers. Sonakshi learns that Rohit has come. She goes to meet him and finds him with the family. She asks him if he wants to tell them that she is innocent. Nishi accuses her for breaking the family. Sonakshi tells that Nishi is the culprit. Veena reprimands her without considering her good deeds. Sonakshi asks Rohit to tell them her truth. The family criticizes Sonakshi like she was never loved by them. They want her out of the house. She asks Rohit if he trusts her. He slaps her with the divorce papers with the bad charge of infidelity.

He doesn’t check the papers well. Sonakshi slaps him for the dirty clause. She asks him how can he accuse her for cheating and put the infidelity clause as divorce grounds. Rohit didn’t expect this clause to come from Veena’s mind. He feels apologetic, but is helpless to obey Nishi. What will Sonakshi do now? Keep reading.

I totally agree. I loved the freshness of the show, the little comical, little romantic, and the interaction with audience by Sonakshi. Also, what’s up with her wearing sari? She looked so good in different and earlier outfits, it was more natural and normal. And we were enjoying light show, now it is just another saas bahu show, with all the blame on sonakshi, and her whole life concentrated in resolving everyone’s issues that too in a typical bahu avatar. I really hope, writers can bring the freshness of the show back, or I am done watching this crap.