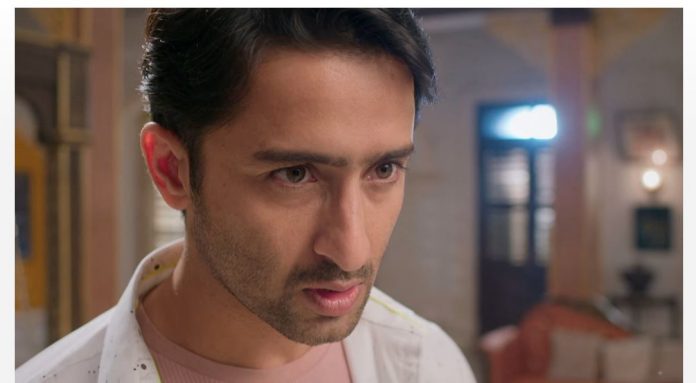 Rishtey Starplus Mishbir Sangeet Accident Mega twists Rajshri wants Jasmeet to heartily accept Mishti and Abir’s relation. She asks if she thinks they are wrong. She doesn’t think so and completely supports Abir. She wants Jasmeet to think of Abir by getting over Nannu’s sorrow. Kunal asks Abir about his shocking decision. He doesn’t know how to react. Abir tells him that he had to take this decision for ending everyone’s fear, since Meenakshi always terrorizes everyone. He doesn’t want Meenakshi’s presence to snatch Mishti’s smile. He wants to make Mishti’s day special and memorable. Kunal is ready to help him. Abir tells that they will plan a grand Sangeet. Kuhu joins Maheshwaris.

Kunal tells that they will really lose out in the Dance competition now. He is really a bad dancer, and wanted Kuhu to choreograph the song for Rajvansh family. Abir challenges Maheshwaris but aims to lose deliberately. Kunal asks the reason for this. Abir tells him that failure also gives happiness since there is victory in watching your lover’s happiness. Kunal thinks he loves Kuhu. He wants to surprise her and change her mind some way. He wishes to call off the divorce. Elsewhere, Meenakshi is left alone and shatters. She wants to be strong. Parul understands her pain and thinks Meenakshi has invited the sorrow herself.

She wishes Meenakshi didn’t play with Abir’s love life before. Vishwamber and Rajshri have a discussion on Abir’s decision. Rajshri feels its not justified, since Meenakshi is Abir’s mum. She wants Meenakshi to attend the functions. Vishwamber reveals that Meenakshi once threatened him about Mishti. He tells that Meenakshi is the reason that he hurriedly fixed Mishti and Nannu’s marriage. Abir learns this and is more angry on Meenakshi. Vishwamber wants Abir to decide. Mishti asks Abir if he is sure of his decision. Abir wants to take Mishti away and secure her happiness. Kunal and Kuhu have an argument over the Sangeet theme.

Mishti too pulls Abir’s leg for his poor dance preparations. Abir challenges her that Rajvanshs will win. Kunal choreographs the song, much to Abir’s shock. Abir doesn’t like his dance appearing like school drill. Rajshri asks Mishti to cheer up Jasmeet and make her part of their happiness. Mishti and family come up with a drama to involve Jasmeet in the dance practice. Meenakshi contacts Laxman for some purpose. Abir overhears her and misunderstands her. He asks her to try, but she won’t succeed in making Mishti away from him this time. Meenakshi clarifies that she isn’t up to anything. He doesn’t believe her and is just living in her fear.

Kunal feels bad for both of them. Abir tells that he wants to live happy. Kunal wants Abir to be happy. He goes to Parul to take advice on Meenakshi’s matter. Parul tells him that Abir is right to fulfill his responsibility towards Mishti, he has to secure her happiness and peace, which can happen just by keeping Meenakshi away. She doesn’t think Abir is doing something wrong.

She tells that Kunal should also do the same thing for Kuhu. Kunal so wishes that Kuhu forgives him. Everyone celebrates in Mishbir’s Sangeet. Abir wants Mishbir’s marriage to be grand. Rajvanshs welcome Maheshwaris. Meenakshi calls Laxman in disguise there. A chandelier falls over Mishti. Abir saves her, and suspects Meenakshi, even then it happens accidentally.