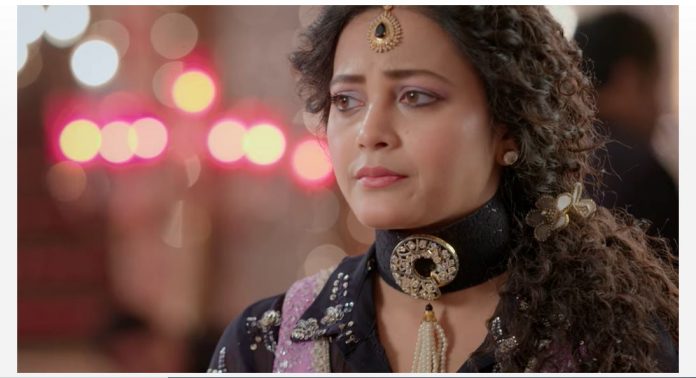 Rishtey Starplus Kuhu shocking blurt Meenakshi accused Abir and Mishti’s Sangeet gets into full swing. Kuhu gets Mishti along with some girls donning ghunghat. She makes the task more tough by Abir by tying a blindfold. She wants him to find Mishti out of the group of girls. Abir finds difficult, but gets timely tip from Rajshri. He identifies Mishti easily because of their strong connect. Kuhu and Mishti challenge the Rajvansh family for the Sangeet dance competition. They are sure that Abir and Kunal will lose. Abir takes up the challenge and is eager to lose, since he already lost his heart to Mishti. Kunal and Nanu ask him to win in the competition, since its about family pride.

The sangeet ceremony is celebrated well on the break up theme proposed by Mishti. The families compete in the first round. Vishwamber and Nanu decide the winners, that’s Rajvansh family members Abir and Kunal. Kuhu doesn’t want to lose to Kunal. She tries to strike a moment, and also finds him putting efforts. She gets confused. She doesn’t want to take his happiness as some hope for her marriage, since she will be much hurt if her hopes break again. Kuhu wants to keep a dance face-off round between Rajvansh and Maheshwari family. Laxman changes his disguise and enters the party. He works as a servant there and captures the celebrations.

The families enjoy a lot. Kuhu and Kunal’s unspoken romance goes on, while Mishti and Abir have a fledged romance scene in their dream. Abir enjoys his Sangeet by keeping his mom Meenakshi away. Abir and Mishti’s happiness gets evident. A chandelier shockingly falls over Mishti, but she gets timely rescued by Vishwamber and Abir’s alertness. Abir suspects that Meenakshi is trying to harm Mishti and spoil the marriage functions. Meenakshi’s aide Laxman runs away from there. He soon gets caught by Rajvansh family. Nanu tells them that Laxman works for Meenakshi.

Abir gets tempered up and accuses Meenakshi further. He feels she can never see him happy. Laxman tells that he isn’t behind the chandelier’s fall. Kuhu finds the burnt rope. Shaurya shows the candle kept there. Abir wants to go to Meenakshi and confront her. Rajshri confesses her mistake that she has shifted the candle’s place thinking of everyone’s safety, but she didn’t know about the chandelier tie-up point. Abir knows her intentions were good. Rajshri asks him not to hurt Meenakshi. He tells that Laxman is in the Sangeet for some reason.

He questions Laxman. Meenakshi tells that she had called Laxman so that he works in the function and gets a chance to capture Abir’s happiness. She tells that she was being a part of Abir’s happiness by watching him on the video call. Abir got hurt while saving Mishti. His hand bleeds. Meenakshi cries for his wound. Abir distances himself. Kuhu yells at Mishti for breaking Nannu’s heart and giving her another reason to hate her. She can’t tolerate Mishti in her life. She expresses her annoyance, which comes as a big shock for Mishti. 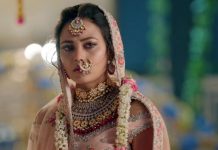