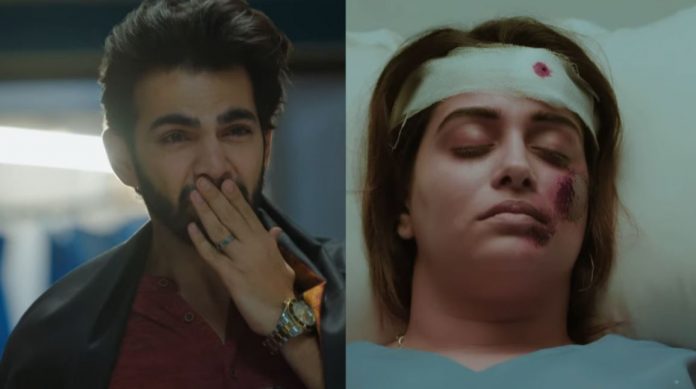 Kahaan Hum Starplus Leap Ronakshi separation tear flood Sonakshi meets with a deadly accident. She gets hit by a speeding truck. Mahesh watches her accident and runs away. He gets unexpected and doesn’t save her life. He feels he will get caught by the police if he takes her to the hospital. The truck driver is drunk. He fears that police will punish him. He sees Sonakshi’s face. His friend identifies her as a famous tv actress. He advises the driver to escape else they will be in jail for long term. The driver doesn’t want his drunken driving to get known. He flees from the spot, leaving Sonakshi helpless in a critically injured state. Rohit misses Sonakshi and cries for his big mistake. He gets too drunk.

He tells that he had no option than to secure Sonakshi’s life this way by sending her away from his worthless and thankless family. He wants Sonakshi to move on and stay happy, far from Sippys. He feels like Sonakshi is much hurt. He shouts her name. He hallucinates and sees Sonakshi telling him about her emotional leaving. He gets worried when she tells that she will never come back to him. He tells her that he loves her a lot and doesn’t want her to go away. He pleads to her to stop. She goes out of his sight, signifying her soul leaving the world. Rohit gets terrified with the thought. He turns more shocked when she disappear.

Nishi finds him overdrunk and asks him if he has turned into a drama king once his wife is out of the house. She taunts him for his drunken drama. She asks him not to be mad. Rohit criticizes her for being a devil in disguise. She tells him that Sonakshi never deserved to become a Sippy. She wants to celebrate Sonakshi’s accident. He tells her that he will not give her reason to celebrate right now. He tells that Sonakshi will always be in his heart, even if he made her away. He doesn’t want Nishi to rejoice. He counts her crimes. He tells that he will not harm her, since she is able to control Naren’s pacemaker. He doesn’t want Nishi to threaten Naren or Veena.

He decides to harm himself, ruin his own life and career to disappoint the entire family. He wants them to know Sonakshi’s worth in his life. He regrets that Sonakshi truly loved him and he couldn’t respect that. He tells Nishi that entire family insulted Sonakshi and now he will bring disgrace for himself by ruining his future. He promises to protect Sonakshi and her happiness. He wants to hurt himself and make Sonakshi’s life better. He asks Nishi to wait and watch. She gets speechless. She feels hurt to see his state. She gets informed by Mahesh about Sonakshi’s huge accident. Mahesh tells her that he has run away to save himself, and maybe Sonakshi is dead.

Nishi is much happy to know that both Naren and Sonakshi are out of her way. She asks Mahesh not to call her again until the news gets confirmed. She wants to stay safe. She thinks she can acquire the property easily now. She celebrates her huge win. On the other side, Pari and Ajit fail to find Sonakshi. They inform Suman that they failed to track Sonakshi. Suman panics and wishes Sonakshi is fine. She calls the police.

She reaches Rohit and slaps him. She yells at Veena for treating Sonakshi like dirt and throwing her out of the house. She questions Rohit about Sonakshi. She tells that she will not accept this. Rohit reveals his divorce decision. Suman shouts on his weak move. She asks him if he has lost his mind to blame Sonakshi for infidelity.

She reminds him the promises he made to Sonakshi and them. She also rebukes Veena for her sudden negative side. Veena further insults Pari for breaking her family. She tells that both Pari and Sonakshi are the worst, they have ruined Sippy family in their own ways. Suman knows to answer Veena. Nishi intervenes to take the argument higher. She doesn’t leave the chance to insult Sonakshi. Veena and Nishi want Suman out. Veena speaks in an insulting tone. She disappoints Rohit a lot. Suman raises hand on Nishi. Yash stops and threatens her.

Suman gets enough of the humiliation. Rohit can’t tolerate the insult and acts rude. He asks Suman to never come back to his house. Rohit learns that Sonakshi is missing. He goes to find her. He checks at many places. A milk vendor comes in front of the car to take help for Sonakshi. Rohit doesn’t want any delay in his search. The man doesn’t let him go away. He stops Rohit’s car some how. Rohit beats him in anger. The man seeks his help and tells about Sonakshi. Rohit can’t believe that she met with an accident. He asks the man to take him to Sonakshi. Rohit comes across the shocking sight of Sonakshi, lying in the pool of blood.

Sonakshi is critical. Rohit realizes the level of her injuries and the harm already done. He is much shocked but reacts like a sensible doctor. He rushes Sonakshi to his car and makes the milk vendor inform Suman about the accident. He makes arrangements at his friend’s hospital instead Sippy hospital. He gets the best surgeons for Sonakshi’s treatment. Rohit doesn’t want anyone to know about his help. He sends her for the operation. He is much broken by guilt. He feels responsible for Sonakshi’s accident. He prays that Sonakshi gets saved.

Rohit stays away from Rastogis. He cries on his ill fate. He watches Sonakshi’s condition. He requests the doctor to not name him in front of Rastogis. Doctor informs him that Sonakshi is stable now. Doctor lies to Suman about someone admitting Sonakshi. Rohit tells some random name to cover his identity. He is much shattered after losing Sonakshi from his life. Sonakshi recovers from her accident. She loses trust on love. She excludes Rohit from her life. Rohit and Sonakshi suffer a painful separation.

This is getting so melodramatic. I thought this serial would have something different for viewers but little did I know that this would also turn out to be same daily soap drama. Why can’t the writers be real and write positive scripts. High time the team realize that this is not viewers want and bring the track back to a normal one.

Reviewed Rating for this particular episode Kahaan Hum Starplus Leap Ronakshi: 1/5
This rating is solely based on the opinion of the writer. You may post your take on the show in the comment section below.