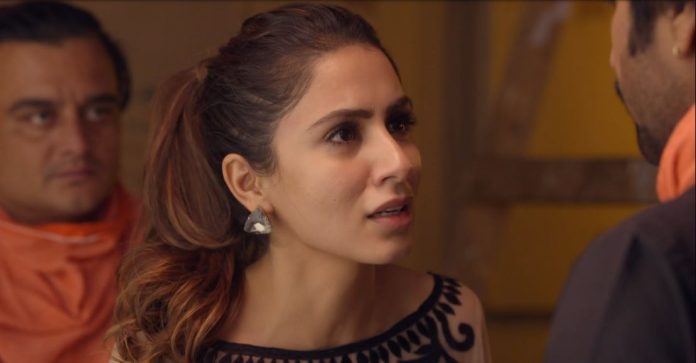 Kundali Bhagya Mahira revelation Sherlyn enjoys new plot Rishabh explains his family that they shouldn’t interfere in Karan’s life. He tells that Karan should take his decisions on his own, without anyone trying to influence him. He feels bad that they are ruining Karan’s life by pressuring him. He tells that Karan is a mature individual and can decide everything. He hopes that his family understands. Ramona doesn’t like Preeta’s influence on Luthras. She wishes that Preeta gets jailed. Meanwhile, Preeta questions Karan’s feelings. He tells her words that few things can’t be answered. He promises to free her from the jail. She believes him. He goes to attend Mahira’s call.

Mahira tells him that she is close to the court. She lies that his promise to Preeta matters to him. She acts to fall in trouble. She tells him that she is being followed by some guys. Karan gets worried for her safety. Karan stays on the call and learns that she has been kidnapped by the goons. He wants to reach Mahira and save her. He gets helpless to leave the court and rush to her. Mahira struggles to save herself. It all looks like genuine kidnapping. Karan tells the family that Mahira is in trouble, he has to rush to her. Ramona hopes that her daughter is alright.

Sarla finds Karan leaving. She gets worried that he left when he had to be with Preeta. Preeta isn’t even given water. She thinks of Karan’s sudden leaving. She hopes that everything is fine. Karan tracks Mahira’s location. Karan connects to Mahira again. She tells him that some goons are after her life. She pleads for help. She tells him that the goons are threatening her and trying to stop her from reaching the court. She tells that goons don’t want her to give statement in Preeta’s favor. She fools him. She asks him to come soon and help her.

He gets tricked and tells that he is soon coming by tracking her location. He wonders who will take such a step and stop her from reaching the court. The goons catch her and slap. Karan asks them to leave Mahira free. The goons kidnap her again. Shrishti tells Sarla that Karan would have gone for some work. Sarla tells that Ravi would be not able to help Preeta. She feels she should have not believed Karan. She doesn’t understand anything. Karan wants to reach Mahira soon and take her to the court to fulfill his promise. He wonders who doesn’t want Mahira to reach the court. He finds something fishy. Mahira slaps the goon and reveals her plan.

She tells him that her plan can’t fail like that. He tells her that nobody will doubt on her. She tells that she will get them arrested if they are caught. She tells that none should know that she paid them money. She doesn’t want her dad to know anything. She is afraid of her dad’s anger. She is sure that she will also be at his target when he learns her misdeeds. She wants to inform Sherlyn and also get the news about Preeta. Preeta is presented in the court once again. Sherlyn goes aside to answer Mahira’s call. Rishabh doesn’t see the call. Preeta waits for Karan. Mahira tells Sherlyn that she doesn’t want Preeta to get free, she had the deal with Karan and is cheating him now.

Sherlyn tells that Mahira was ready to save Preeta and do a favor on Karan. Mahira tells her that Karan will not keep his promise once Preeta gets released. She tells her big plan that she hired the fake goons to attack her and kidnap her, so that she gives the excuse for not reaching the court. She tells that she planned the entire drama and fooled Karan. Mahira wants to get Karan in her life. She tells that she has worked hard and made the kidnapping look real. She doesn’t want anyone to know her plans.

Apparently the writer of this serial wants all to believe all Indians are fools and very gullible. Dear writer please make your stories more realistic and stop feeding us trash, if it’s not loss of memory today, then it is almost being revealed but… or the antagonist is forever getting away with evil. Please do us a favor and put an end to this your merry go round story except maybe your targeted.