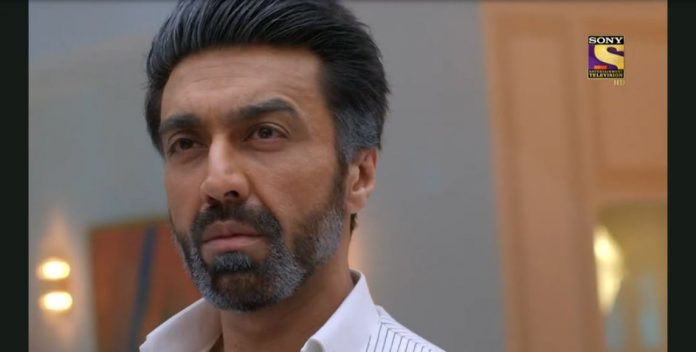 Mrityunjay doesn’t want to forgive her for all the insult. He punishes her. He loves his family, but his pride more. She remembers that Mrityunjay got her dad and brother killed to take revenge on her. Mrityunjay wanted her to die as well. Maya remembers the time when Mrityunjay attempted to give her a brutal death. She had stayed strong and tolerated the brutality. It was her fate that she survived despite the injuries. Maya now loses believe in goodness.

She just holds faith in God, who would help her in completing her revenge goals to get justice for her child’s loss. She is much regretful that an innocent Manvi died that day by Mrityunjay’s hands. She prepared herself as Maya. She has won over her death just to conquer over Mrityunjay. She swears to take revenge on his family and burn them by her ire. Mrityunjay confronts Maya for killing Rishi. Rudra defends Maya when Mrityunjay blames her for cheating Rishi and provoking him for the suicide.

Rudra doesn’t believe anything against her. Rudra is ready to die for Maya’s sake. He tells Mrityunjay that Maya is his life, none can reach her to harm. He protects her and keeps his vow. He tells that he loves Maya and dutiful to protect her. Antara tells him that Maya killed Rishi. Rudra doesn’t think so. He tells them that Maya was with him when Rishi committed suicide. Ananya reminds him that he was at home for their engagement when Rishi died and sent them a video. Rudra tells that he remembers taking Maya’s help in finding Rishi. Maya enjoys Mrityunjay’s plight.

He tells that he had Maya with him in his joy and sorrow. Antara shows the evidence against Maya. Maya gets to see the strength of true love when Rudra shows trust on her. Rudra tells them that Rishi’s girlfriend was Mayra, who shot Mrityunjay and got killed by Mrityunjay’s hands. He asks Ananya not to mislead his family. He doesn’t think Maya has any revenge motives to do all this. He turns everyone speechless. Rudra reprimands Ananya for crossing her limits and speaking ill about his wife.

Maya wants to provoke them to admit the truth. Mrityunjay knows Maya’s game. He warns her that the game has begun and he will make her life hell. He announces a grand reception for Maya and Rudra. He wins Rudra’s trust again. Mrityunjay asks his team to assist him in his plans once again, since a new game will be played with Maya. Maya gets terrified when Mrityunjay appears dirty minded again. She fears his evil plans.