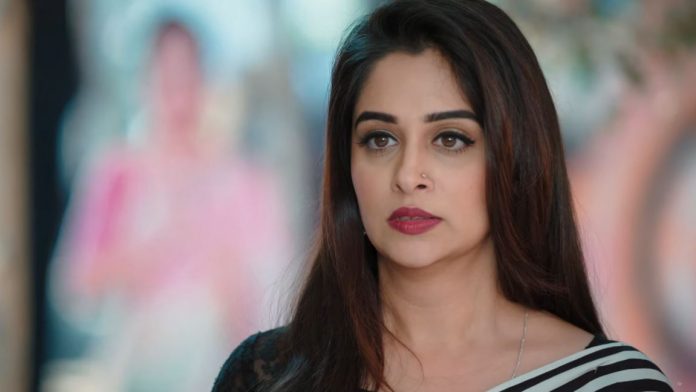 Kahaan Hum Bold makeover Sonakshi Sippys pay back time Sonakshi’s new change will be seen. She becomes a strong and determined person with big goals. Sonakshi recovers with time. Suman and Pari meet her and support her in the tough phase. Suman protects Sonakshi. Pari can’t tolerate the sight. She knows Sonakshi is a good-hearted person, who is still deceived by Sippys. She gets revengeful on Sippys, who ruined her family. She doesn’t think Sippys deserve happiness. She wants to punish them and take her revenge on Tanya first. She calls Rahul to seek Rohan’s details. She lies that she is moving on and wants to apologize to Rohan. She fools him and gets Rohan’s location.

Rohan takes Tanya for dinner. Tanya spots Pari around and reacts in fear. Rohan calms her. Pari drugs the food to get Tanya’s child aborted. Rohan stops Pari and reprimands her for the bad act. He threatens her. He wants to protect Tanya and his coming child. He confesses his love for Tanya. This rages Pari even more. Sonakshi sinks in sorrow. Suman cheers her up. She asks her not to think of Sippys, who couldn’t value her. She tells tht Sippys aren’t capable to handle her stardom and success. She feels its good that Sonakshi got rid of Sippys.

She motivates Sonakshi to build her career again. She wants her to focus on her work and prosper well. Sonakshi agrees to her. She feels she was a fool to believe in her love. She doesn’t want to think of Rohit’s love. She is badly cheated. She feels Rohit has killed her and now a new Sonakshi will be born, who will be strong-headed and too successful that she can give an answer to Sippys. She burns Rohit’s picture and makes him out of her heart. She wants to hurt Sippys by her success. She gets determined to fulfill her goals.

Elsewhere, Rohit feels lonely. He is seen hurting himself by drinking much liquor. He wants to poison his life by ruining his career. He doesn’t want to do successful surgeries and earn for Nishi, who has taken control over Sippy hospital and property. He wants Nishi to suffer. He misses Sonakshi. He tells that he never deserved her. He feels he had to do this with Sonakshi and make her hate him so that she can move on happily with confidence. He doesn’t want Sonakshi to get a heartbreak after knowing his truth. He wishes Sonakshi hates him more and more, so that the hatred drives her ahead. He is ready to bear anything to see her successful in life.

He turns up at the hospital when Nishi summons him for an important surgery. His drunken state makes the person lose faith in him. He loses the surgery and also spoils his reputation, hard-earned since years. He cares nothing about himself. Nishi worries seeing her plan failing. Ajit tells Nishi that this day had to come, since she has taken over all their possessions and also harmed Naren and Rohit’s lives, but she can never control them. He asks her to run the hospital on her own. Nishi knows its impossible to run Sippy hospital without Rohit. Ajit curses Nishi.

Meanwhile, Sonakshi gets back in form and resumes her shoot. The media talks about Ronakshi divorce, which has become a breaking news in recent times. The reporters reach the sets to take Sonakshi’s interview. They question Sonakshi about the divorce. Sonakshi doesn’t answer the media. She gets a warm welcome by her co-stars and crew. She wants to do good work. Sumit tackles the matter when some colleagues gossip about Sonakshi’s divorce and blame her for the relation’s ugly end. Sonakshi doesn’t want anyone to blame her, since she had enough. Sumit supports Sonakshi as a good friend.

Sonakshi declares that her marriage is broken now. She wants to make her identity without her husband’s support. She tells that women are always self-sufficient. She tells Sumit that she will work so hard that she achieves much success. Sumit is with her. Suman meets Sonakshi and explains a building project. She wants to get the property. Sonakshi asks her to go ahead with her plans. She wants to insult Sippys by slapping her success on their face. Ajit informs her about Rohit’s whereabouts. Sonakshi goes to meet Rohit. She finds him drunk and uttering nonsense. Rohit insults her once again to make her away from his life.

He asks her not to plead for her, he will never accept her. She blames him for ending her belief in love. She tells that she will be successful and then tackle him. Rohit hurts her heart. Sonakshi hates him further. She is ashamed that she fell in love with a feeble-minded guy. She wants to prove that she doesn’t need Rohit and can lead her life well. Rohit also wants her success. He wishes her good luck. He prays for her, like a true helpless lover. Sonakshi will be seen in a bold look after the short leap of four months. Sonakshi will be seen making Sippys pay back for their misdeeds, injustice, and breaking her trust again.

Separation and divorce, these two are NOT the solutions to solve any family matters. Love is the true healing balm to any negativity in life. For once show that true love can conquer anything. Please bring Rohit and Sonakshi together again and let them both fight against the family and sort out the family matter. Hey creative writers, we as viewers want something good and different to watch! We want to watch goodness happening in a TV series and not revenge.