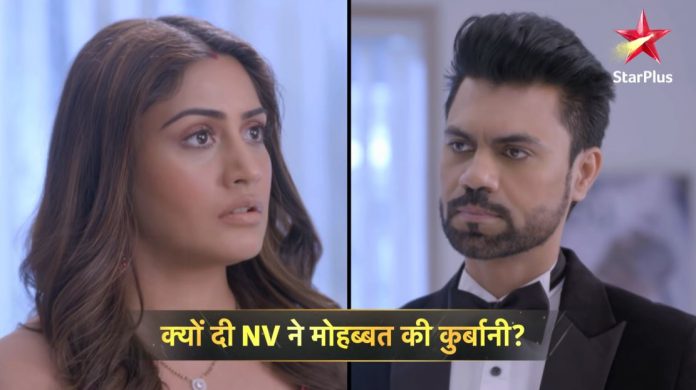 Promo Sanjivani NEW Sidisha back NV sacrifices love Ishani asks NV for divorce. She reminds him that she has already planned their divorce on the first day of their marriage. He remembers it well. He is much heartbroken. She asks him to free her from the unwanted relation. He recalls the time when he first met her for the alliance talk. He liked her since she was true to him about Sid and her past. He tells her that he has married her to spend his life with her, not to divorce her. He wants to overlook her past and her present depression as well, in a hope to shape up her future. He appears selfless to her, which makes her feel more guilty. She signs the divorce papers and wants him to sign it.

He doesn’t want to divorce her ever. He still respects her wish. He vows to give her happiness at any cost, even if he needs to sacrifice his love. NV takes Ishani with him. She wants to know where are they heading. He stays silent. She asks him again and again. Rishabh and Rahil wait for Sid to gain consciousness after the successful surgery. Sid gets conscious as per their prediction. He takes Ishani’s name and wants to see her. Rahil gets worried that Ishani didn’t come yet. He loses his cool that she is still playing with Sid’s feelings. He doesn’t know how long will she take revenge on Sid for his one mistake.

He wants Ishani to help Sid recover and then confront him for his cowardly escape. He doesn’t wish them to fight in a way that Sid loses his life. He summons Ishani. Rishabh tells him that Ishani isn’t in Sanjivani, and even NV is missing. He jokes on NV who had made big promises in the party that they will be present when Sid opens his eyes. Rishabh tells that NV would have taken his wife for a long drive, since Sid doesn’t matter to him. He wishes NV doesn’t come and blame him for Sid’s condition.

Rahil swears to end friendship with Ishani if anything happens to Sid. NV takes Ishani to a Gurudwara. He cleans the people’s shoes to do a good deed. Ishani also cleans the shoes and earns some good deeds. She follows him. Bebe learns that Sid got conscious. She tells Philo that she has no idea where NV and Ishani went. Philo tells that Sid is asking for Ishani. Rahil panics when Sid’s health deteriorates. He wants Ishani to come soon. NV tells Ishani that his Bebe raised him into a strong individual, who believes in doing good. He doesn’t want Ishani to have hatred in her heart, that would just poison her life.

He guides her to forgive Sid and move on. Ishani tells him that she can never forgive Sid, who has done much wrong. NV still asks her to be good and not punish Sid. He tells that she isn’t hurting anyone. He doesn’t want her courage to fail. He promises her. She realizes he is really a good man. Rishabh criticizes NV and Ishani. He further angers Rahil. Sid asks for Ishani. Rahil feels helpless. NV gets Ishani to Sid. He asks Ishani to be with Sid until he recovers. He gives her hand to Sid. Ishani doesn’t want to face Sid and runs away.

Best Comment by Uma:
Such a beautiful and successful Sanjivani serial in previous is turned into a stupid serial by the story writer in this season. It is better to close the serial instead of torturing the only few viewers left.