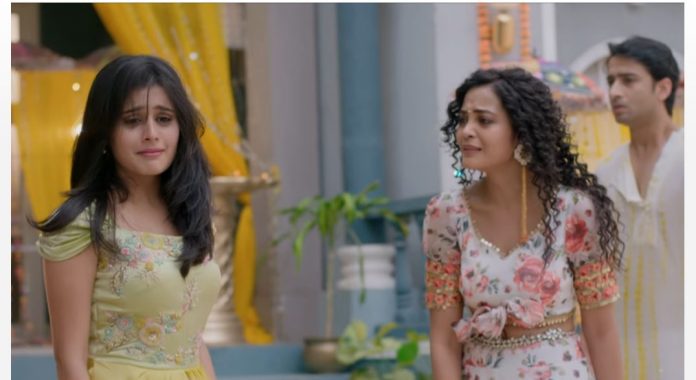 Rishtey Pyaar Big drama Starplus Patiala Babes Upcoming Kuhu’s divorce matter gets known to Maheshwaris, who strongly react against it. Kunal wants to apologize to them, since he had forced Kuhu for the divorce. He doesn’t want anyone to misunderstand Kuhu. Kuhu asks him not to hurt her family more. She is much upset that Varsha is crying because of her. Kuhu slaps Mishti and accuses her for bringing sorrows in her life. She always wanted freedom from Mishti. Abir and Kunal support Kuhu. They don’t think Kuhu is at fault. Varsha, Shaurya, Vishwamber and Rajshri are much hurt to know this news. Even Parul breaks down seeing her son’s marriage breaking.

Kuhu gives a long explanation to them. Varsha and Parul take a stand for their children and argue. Rajshri questions Kunal for his shocking decision. Kunal fails to express his feelings. Kuhu tells them that Mishti is responsible for her marriage and divorce. She tells them that Kunal had married her just to make Abir and Mishti away. She reveals the entire truth of her painful journey post the loveless marriage with Kunal. Maheshwaris are much shocked to know Kunal’s truth. Mishti asks Kuhu to face the reality and stop accusing her. She explains how much she loves Kuhu and wishes her betterment.

Abir and Mishti get upset and call off their marriage seeing a marriage breaking in front of them. Abir wants to fix things up. He asks Maheshwaris to trust him and give one chance to Kunal, who doesn’t love to divorce Kuhu. Shaurya and Varsha refuse to believe Kunal. Kunal fears of losing Kuhu.

Please now let Mishti and Abir’s wedding happen peacefully. Kunal and Kuhu’s story can happen after the wedding. Maybe it’s also time to show Kuhu in a different way, I find her immature and she can’t keep blaming Mishti for everything. Nishant was a past, the blame can’t be dragged on. Give Meenakshi a chance to show her good side, come on a person cannot be rude and mean minded life long. Hoping for the better with this TV serial.

Mini and Arya have a pillow fight and enjoy their time like good sisters. Mini loves Arya a lot, and so does Arya. Arya tears the pillow and messes the room with the fur. Mini asks her to end the fight. Arya likes Neil as her friend. Mini and Arya also become friends so that they keep sharing their life matters. Arya runs away. Mini hits the pillow on Neil by mistake. Arya jokes that they both have become chicken because of the fur. Neil and Mini get into a moment. Mini laughs on seeing Neil. Neil cutely argues with her. Neil tells that he really needs sleep and doesn’t want them to shout around. He wants some peace. Mini has started liking Neil. Arya pulls Mini’s leg by asking if she likes Neil.