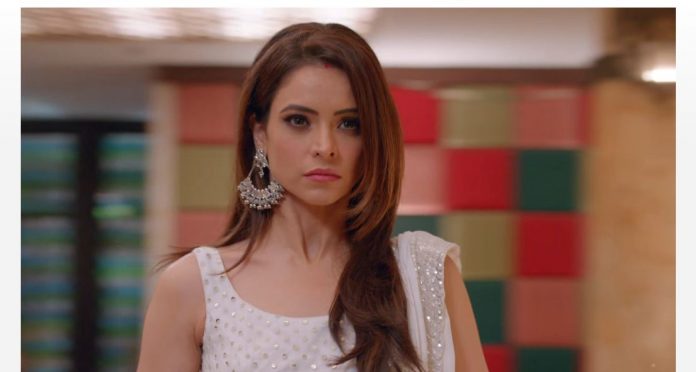 Kasautii Zindagi NEW Starplus Pacey Challenges Coming Prerna and Komolika’s challenge throw out goes on. Prerna wants Anurag’s love, while Komolika just wants to claim him to win the challenge, like any game reward. Prerna wants his betterment, while Komolika simply wants to ruin Prerna’s happiness at the cost of Anurag’s happiness. Komolika cares a damn about the lovers. She hates Prerna more than her obsession for Anurag. She wants to make sure that Prerna dies or suffers in her life with Viraj. She reminds Prerna that very soon Viraj and Prerna will get married, which would mean that Prerna will be bidding a bye to Anurag forever. Prerna clears her misunderstanding.

She tells Komolika that Anurag loves her even when he doesn’t remember anything, their love is strong. She tells that Anurag gave her an engagement ring and that’s close to her heart. She reveals her plan that she had faked the hand injury to avoid the engagement with Viraj. She removes the fake dressing and shows the ring. Komolika gets angered. Prerna challenges that she will expose Komolika’s truth in three days and make her get ousted from Basu family. Komolika controls her temper.

On the other hand, Anurag suspects Viraj and confronts him. He asks Viraj if he loves Prerna. Viraj admits that he loves her a lot and can’t wait for the marriage. Komolika calls Viraj to fix a meet. Viraj stays occupied because of Anurag. Anurag tells that he wants Prerna’s security and happiness. He gets more suspicious after catching Viraj’s lie. Viraj has lied about meeting his mom outside the hospital, when he met Komolika. Viraj rushes to meet Komolika. He understands that Anurag is suspecting him. Anurag wants to know what is Viraj hiding and why. He doesn’t want to take any risk about Prerna.

Viraj informs Komolika that Anurag was questioning him. She asks him to meet her at his house. Anurag stays away and follows Viraj to know his truth. Shekhar and Tushar try to find out the culprit by meeting the mechanic. They meet the stall owner who knows the mechanic well. Shekhar requests the person for helping him, since about his sister and also an unborn baby’s life. Shekhar gets the mechanic’s address. He assures that police won’t trouble him. Ronit reaches the mechanic’s place to kill him. The mechanic stays alert and suspects him. He also points a gun and scares her at first.

Ronit tries to fool him and asks him to serve drinks. Ronit makes an attempt to kill him. They have a fight until Shekhar comes there. The mechanic tells Ronit that he knew this would be happening. He warns Ronit and makes him away. He gets saved, while Ronit gets trapped by Shekhar’s coming. Ronit doesn’t want Shekhar to see his face. Viraj thinks Prerna wants to refuse for marriage, but he won’t give her this chance. He is glad that Veena is on her side. He finds Anurag following him. He drives around the same place and tricks Anurag. He catches Anurag and confronts him for following him. Anurag admits that he was following to return his watch. Viraj taunts that Anurag lost his memory and forgot that its his own watch.

He tells that if he offers his belongings to others by forgetting, then he may lose a lot. He means to say that Anurag forgot Prerna and got her alliance for Viraj. He asks Anurag to keep his watch and go home. Anurag gets speechless. Viraj asks him not to follow him now. Anurag goes home. Viraj reaches his house and meets Komolika. Shekhar suspects some fight occurrence on seeing the broken glass pieces on the floor. Viraj tells Komolika that Anurag is spying on him. She tells that Anurag will keep trying such things till the marriage happens, he is much possessive about Prerna.

She asks him to marry Prerna in a day’s time so that he can take her away from their lives. Viraj agrees to talk to Veena when she tells him that Prerna has challenged her. She tells that she has already made arrangements to control the mechanic. Viraj likes her plotting. Ronit runs away from Shekhar’s clutches.

The mechanic gets caught some how. He is arrested and tells the police about Sonalika, who planned the accident to kill Prerna. Komolika tells Shekhar that Sonalika is behind all the conspiracies, she is actually Komolika. She makes a plan to expose Komolika. Anurag’s suspicion on Viraj grows further. He shares it with Anupam. He wants Prerna happy. Anupam asks him to break Prerna and Viraj’s marriage in order to see her happy. Anurag gets puzzled and questions him. Will Anupam tell him the truth of his eternal love story? Keep reading.