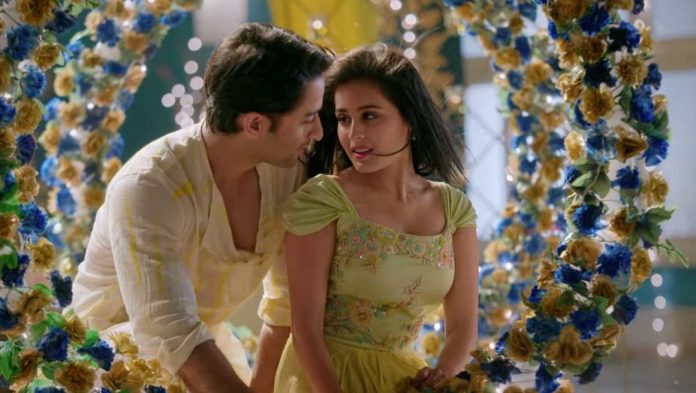 Starplus Rishtey Mishbir Strange Kuhu demands Mandap Abir and Mishti have a romantic scene, while they are seen decorating their mandap with flowers. They also have a marriage rituals rehearsal. They want to be together forever. They realize that they will be becoming Mishbir really soon. They cherish the last few hours of their courtship. Rajvansh and Maheshwari families meet to discuss about Kuhu and Kunal’s divorce. Kunal expresses the wish to remarry Kuhu. He is also ready to divorce her for the sake of her happiness. Kuhu admits that even she loves Kunal and doesn’t want to divorce him. Kunal and Kuhu seek permission and forgiveness from their families.

The families are more than happy to unite them again. Jasmeet doesn’t have any emotions left for Mishti. She is much angered that Mishti cheated Nannu and broke his heart. Whenever she gets a chance to attack Mishti, she does so. Kunal tells them that Mishti isn’t at any fault. Kuhu and Kunal call off their divorce and also decide to get married, as per Kuhu’s dreams. Kuhu tells that she has changed her decision because of Meenakshi, who made her realize that the family belongs to her and she shouldn’t leave her rights. She wants to be with Rajvansh family. She thanks Meenakshi for her timely advice.

Vishwamber asks Nanu to assure that Kuhu will be happy in his house. Kunal and Nanu give an assurance and tell that Kuhu is herself the other name for happiness. Kuhu wants to feel special and get all the attention. The families ask Kuhu and Kunal to prepare for their marriage. Kuhu keeps a shocking demand that she wants Mishti’s mandap for the marriage. Kunal promises to keep Kuhu happy. He can’t be sure if Abir and Mishti will accept her demand. Maheshwaris discuss about Kuhu’s strange demand. Abir and Mishti tell that they have united and none can separate them. Jasmeet tells Varsha that Kuhu didn’t do anything wrong.

Varsha thinks it will be injustice with Mishti. Vishwamber and Rajshri feel helpless that they can’t keep both their daughters happy at the same time. They think Mishti will surely accept Kuhu’s demand, which will be unfair. They didn’t wish Kuhu to snatch Mishti’s happiness this way. Kuhu just wants Mishti to lose out the family’s attention. Rajshri feels bad that Mishti will sacrifice her happiness. Jasmeet counts the family’s favors on Mishti. Vishwamber turns upset and teaches a lesson to Jasmeet. He tells that he did favors on Nannu and Kuhu as well, but accepting them in the family. He doesn’t want to tolerate any humiliation for Mishti. He gives her a final warning.

Abir and Mishti get the news that Kuhu and Kunal are getting married. They happily congratulate Kunal. Kunal tells them about Kuhu’s strange demand to get Mishti’s mandap. Abir can’t promise Kunal anything. Mishti meets her family, who wants to know her answer. They suggest her to refuse to Kuhu. Kunal tells Mishti that he will convince Kuhu and they need not worry. Mishti asks him to let Kuhu marry in the mandap. She shows a big heart once again knowing Kuhu always makes immature moves. Everyone sings Mishti’s praises, which further upsets Kuhu.

Kuhu was thinking that Mishti will refuse to handover the mandap. She gets surprised that she agreed, but misunderstands her intentions. Kunal accepts Mishti in the family by seeing her big sacrifice. Kuhu thinks Mishti is getting all the attention again. Abir tells that he isn’t interested in mandap and wants to elope to marry Mishti. He cheers up everyone. Kuhu and Mishti sit for the function. Vishwamber and Rajshri feel proud of Mishti’s selfless side. He tells that Kuhu’s marriage will happen after Mishti and Abir’s marriage. Kuhu doesn’t want to become second important person. She feels bad. She taunts Mishti.

She wants to get married first. Varsha and Rajshri try to talk to the girls to explain them that they are lucky to stay in same Sasural forever. They want to become strong united sisters and keep Rajvansh family happy. Abir and Kunal also enjoy their functions. They get fatherly figure in Vishwamber. Vishwamber loves Abir and Kunal a lot. He blesses them. Abir thinks if he is wrong to keep his mother away from the marriage functions. He thinks to invite Meenakshi at least for Kunal’s sake, since Kunal is missing her. Kuhu keeps her next demand that she wants to marry first. She plans to delay the mahurat so that Mishbir’s marriage gets postponed. Mishti will eventually marry Abir.

Best Comment by Urvi dadia:
Kuhu stop behaving bad to mishtis she has always thought good for kuhu but in return she has got nothing only pain nothing else. Let mishti leave happily with Abir.