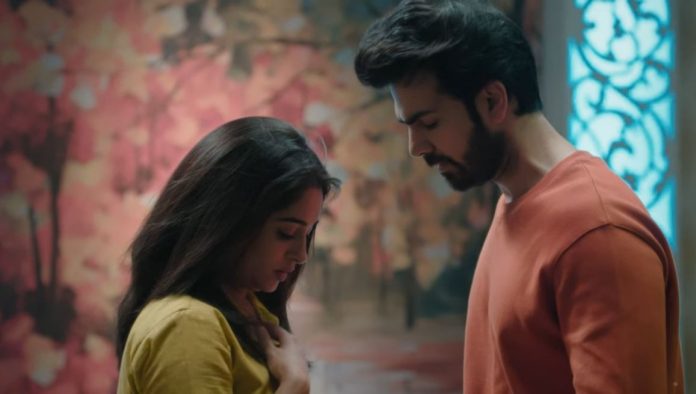 Kahaan Hum Horrific Epidemic Starplus Climax drama Sippys meet the pandit to get a date for Akash and Deepa’s marriage. Veena is worried for Rohit and shows his birth chart to the pandit to get some remedy for his problems. The pandit is bribed by Nishi to mislead Veena. He tells Veena that Rohit may shatter if he doesn’t get stability in his life, which is possible if he gets married again, so that his life partner takes off the emotional burden form him. Veena is confused knowing Rohit will never agree for a second marriage. Nishi asks her to talk to Rohit. She tells that Rohit needs an emotional support, else they will lose him forever.

Veena wants her son’s happiness now, which she didn’t think of before. She had forced Rohit to divorce Sonakshi due to her high hatred for Sonakshi that time. She tells Nishi that she will talk to Rohit. On the other side, Rastogis are troubled knowing Pari’s pregnancy. Rohit clears off the medicine from Pari’s stomach. He tells Sonakshi that Pari is fine and even her baby is fine. Suman feels guilty since she failed to look after her daughters. Sonakshi pacifies her mother. She doesn’t think its Suman’s fault. Sonakshi gets angered on Rohit for trying to abort Pari’s baby, so that it doesn’t cause any harm to Rohan and Tanya’s future.

She asks Rohit how much will he shock her further. She asks him not to show false concern, since she has seen him giving the abortion pill to Pari. She calls his goodness a drama. He thinks she has lost her mind completely that she is doubting a doctor, who believes in saving lives.

He asks her to get real and stop living life like Parvati. She tells him that he always criticized her profession, but the truth is his family is filled with worse characters than the tv. She taunts him about Nishi. Sonakshi and Rohit have a heated argument. He wants her to get lost, once she is done with anger vent off. He tells her that he can see that she isn’t a caring sister for Pari. Suman is much disturbed. She finds Rohit and Sonakshi’s romantic moment. She realizes that their love is still evident.

She doesn’t want them to think of union, since Sonakshi will again get pain because of Sippys. Rohit makes a leave. Suman wants Sonakshi to marry Sumit. Sonakshi tells that she will call the police and get Rohit arrested. Suman stops her from spreading the news of Pari’s pregnancy. She tells that if they involve police, then media will also get involved. She fears Pari’s defamation. She tells that she will take Pari to some other city for her delivery. She doesn’t want anyone to know about the illegitimate child. Sonakshi stops from running away.

She tells that they aren’t wrong and won’t flee, they will stay back in Mumbai and protect Pari from Sippys. Sonakshi promises Suman. Suman wants to slap Pari. Sonakshi and Suman ask Pari to stop being mad. Pari tells them that she will go to Sippys and ask for her baby’s rights. She wants to use her baby to get into Sippy family. Rohan arrives home in an injured state after Rohit bashes him up. The family gets worried for him. Rohan doesn’t tell anything to them.

Rohit comes home next and asks for Rohan. The family wants to know the matter. Rohit reveals the shocking news that Pari is pregnant and the worst part that Rohan tried to kill his own baby by plotting Pari’s abortion. The Sippys are shocked to know this. Tanya is much hurt and argues with Rohan. Rohit tells them that Rohan fell in his eyes by acting like a criminal.

Nishi supports Rohan. She spits poison against Rastogis. She tells them that Sonakshi ruined Rohit’s life and now Pari is targeting Rohan by using the baby. Rohit is much upset that Rohan has an affair with Pari and cheated Tanya, he didn’t repent for his mistakes and now was going to commit a heinous crime. Veena realizes that Rohit is right, Rohan has really done a crime.

She asks Nishi not to support Rohan. Tanya soon falls down the stairs and suffers a miscarriage. The family rushes her to the hospital and get the bad news. They lose the Sippy heir. Rohan cries on losing his baby. Veena tells him that he has paid for his crime, how could he plan to kill a baby. She slaps him. Doctor tells them that Tanya may have internal injuries, which would mean that she may never conceive.

Rohan can’t believe this. He realizes his mistake. Rohit learns that a patient has died because of a deadly infection spreading quickly. He wants to study his case and find out about the infected patients. He is worried that an epidemic is taking a huge toll on innocent lives.

He wants to be sure of the epidemic and inform the authorities to take necessary measures. Meanwhile, Sonakshi cheers up Suman and asks her not to worry. Suman feels Sonakshi has dealt with many problems, she doesn’t deserve these sorrow in life. She advises her to marry Sumit. She wants Sonakshi to marry her good friend Sumit, who will keep her very happy. Sonakshi is speechless. She loves Rohit and wants to refuse to Suman. She visits the hospital and meets Naren. Naren shows improvement after meeting her. Rohit is happy to see this, but fakes anger again. He insults Sonakshi badly to keep her away from himself. There will be big twists with an epidemic breaking out and causing chaos.

Please do not stop the show requesting the channel about the reconsideration. I have been watching this show right from the first episode and I really liked the chemistry of Ronakshi. Their love and hope for each other makes a good inspiration to all the couples.