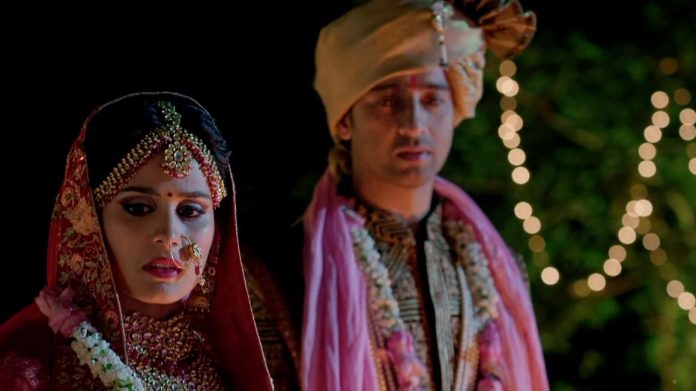 Mishti Meenakshi Sasural drama strikes in Rishtey Hai Pyaar The families think where did Abir disappear from the baraat. Kunal tells them that even he didn’t see Abir going. Vishwamber asks them to calm down and not jump to any negative conclusions. Kuhu wants to tell her demand that she wants to marry first. Vishwamber tells them that Abir has come. He wants Abir to tell them his decision. Abir tells them that he has taken the advice from Vishwamber, since he was much confused. Vishwamber tells that Abir didn’t run away from the marriage. Abir tells that its his life’s big day and he wanted to get his mum in the marriage. He tells that he has done this for Kuhu and Kunal too.

Meenakshi hugs her sons Kunal and Abir. Mishti and Kuhu are happy that Meenakshi has come. Mishti is troubled thinking her marriage won’t happen with Abir if mahurat ends soon. Kuhu wants to tell Varsha about her demand. Jasmeet asks Kuhu if Mishti has done something again. She gets a chance to hurt Mishti’s feelings. Abir and Kunal get a grand welcome by Maheshwaris. They fulfill the rituals. Meenakshi goes to take the brides. She blesses Mishti and Kuhu. She asks them to come with her to the mandap. Mishti sacrifices her happiness and asks her to take Kuhu to the mandap, since Kuhu will get married first.

Rajshri understands that Mishti is making a sacrifice for Kuhu’s sake. Meenakshi also feels proud of Mishti’s happiness. Mishti tells them that she will marry Abir once Kuhu’s marriage gets done. Kuhu goes to the mandap. She gets emotional when Abir also supports her and lets her marry first. Abir wants to meet Mishti. He is supportive of her decision. Kuhu marries Kunal. She gets glad. The marriage rituals take much time. Vishwamber is much worried since mahurat is ending for Mishti’s marriage. Mishti feels that Kuhu can’t snatch her happiness. She wants to get married to Abir in mahurat time.

Vishwamber tells that there is just 5 mins left, the mahurat will end. He asks Rajshri to call Mishti. Mishti calls Abir and takes him outside the house. They send Jugnu to call the family outside. Kuhu gets selfish and tries to delay more. She asks them for a family selfie. Parul asks her to take pictures later, they have to get Mishbir married. Mishti gets Abir to the decorated mandap over the bus top. Abir is surprised seeing the wonderful arrangements done by Mishti. The family wonders where are Abir and Mishti.

They go out and see Mishbir unique wedding. Mishti and Abir sit in the trolley and reach the bus top. Abir and Mishti begin their marriage rituals. They are very happy. Mishti surprises everyone by her smart plan. Kuhu gets jealous. Mishti faces a hurdle when the pandit asks them to rush with the marriage rounds. Kuhu is happy to see the problems. Abir and Mishti plan their wedding rounds in a unique way again. Jasmeet brainwashes Kuhu and asks her to keep Mishti away by winning Meenakshi’s heart. She also insults Mishti to break her confidence. She tells that Mishti always ruins families. Mishti gets much upset because of Jasmeet and Kuhu.