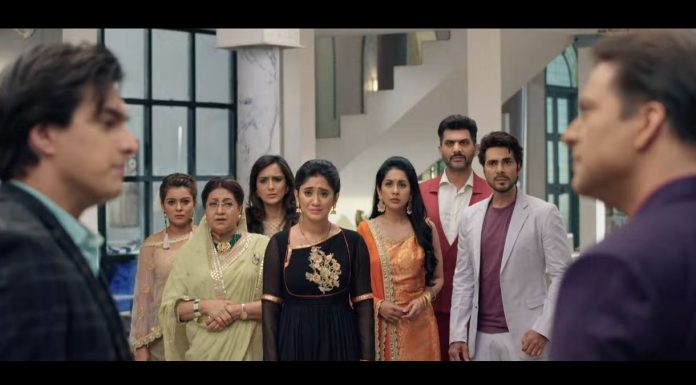 Yeh Rishta unbelievable Kartik Naira Starplus stunner Naira gets too raging and threatens the fraud lawyer Javeri. She tells him that she will bring out his truth and also defeat him in the court in Lav and Kush’s case. She wants justice for Trisha. She gets too frustrated seeing her family supporting the wrong doers, being blinded in love. She tells them that they have done wrong and encouraged Lav and Kush furthers. Goenkas feel helpless since they can’t see Lav and Kush in jail. Kartik reaches the court and finds Naira yelling at the lawyer. Javeri finds Naira a lost case.

He tells Goenkas that they must control her Bahu, since threatening someone is also a crime. Naksh and Trisha calm down Naira. They don’t want her to get enmity with Javeri, who threatens to drag her to the court. Naksh tells that they will hire a better and true lawyer this time. Javeri tells that they won’t get anyone better than him. He laughs on Naira and further mocks her. The family leaves. Naira stay alone in the court. She gets sorrowful and hallucinates about the current situation where Lav and Kush defeated Trisha by the power of their richness. Kartik consoles Naira. She tells him that she has lost, since Trisha got blamed in the court. She tells that Javeri stained her character and may fall more low in the next hearing.

She tells that maybe Trisha won’t get justice. He asks her not to lose hope, she just lost one fight, but the battle is still on. He promises to support her. She gets surprised that he isn’t supporting his brothers now. He tells that he has realized his mistake and also her point that Goenkas are setting a wrong example by protecting the wrong doers. He shocks her by revealing Kairav’s crime of hitting the servant’s head with a glass bottle. She can’t believe it. He tells that Kairav isn’t regretful or scared of punishment, Kairav is sure that Manish will free him by using his richness, none can punish him.

He tells that Kairav got the wrong example because they supported Lav and Kush. He tells that apart from the court battle, they have to battle with family as well. He feels he has done much wrong. They make a promise to fight for truth by going the family. Goenkas come back home. Javeri arranges the dhol artists. Lav and Kush happily dance. The family thinks they aren’t regretful and feel proud of their mistake. Javeri tells them that he can’t the dhol artists to show that Lav and Kush are celebrating happiness, they are not criminals, they are innocent and got free from the court.

He tells that the city will know that they are innocent, their image will be clear always. He tells Goenkas that they have to keep his reputation. Surekha welcomes her sons with love. Kartik and Naira oppose Lav and Kush in anger. Kairav gets scared when they call the police. He thinks police will arrest him and runs away. Kartik tells Lav and Kush that he called the police for a surprise, Javeri will be arrested for making his son Abhishek flee.

Naira tells the police that Abhishek is also a culprit, Trisha has confirmed it. Javeri shocks her by calling Abhishek. He tells that he will prove that his son is innocent. Javeri provokes Manish and Akhilesh. This leads into a big argument between Manish and Kartik. Kartik wants to support the truth. Manish asks him the reason for opposing the family. He angrily asks Kartik to leave Goenka house. Kartik and Naira have to battle the family’s thinking.