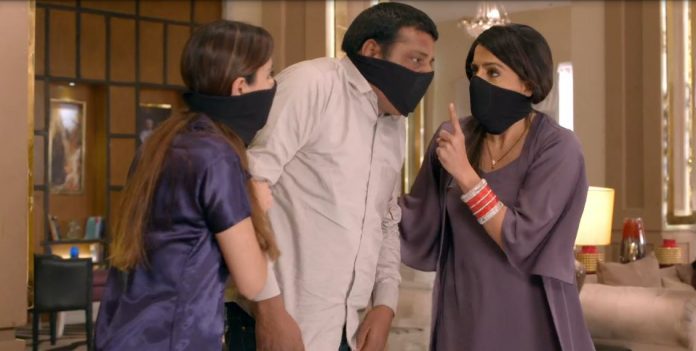 Kundali Zee5 Sherlyn Mahira daring plan backfires badly Mahira advises Sherlyn that they will make Babbi flee first, so that Preeta gets no help. She tells her that if Babbi reaches the court with Luthras, then they will be saving Preeta. Sherlyn thinks her plan is right. She asks how will they do this. Mahira tells her plan to make everyone sleep or faint by using a chemical gas. She tells that they will make the driver flee quickly. Rishabh reacts seeing Babbi wearing his shirt. Sameer tells that he had to give the shirt. Karan asks Rishabh if he is so possessive about his clothes. Rishabh throws attitude for the first time. The family gets a smile seeing his behavior. Rishabh behaves maturely on seeing Preeta, as predicted by Sherlyn. Shrishti visits them.

Karan quickly hides Preeta, thinking police has come again. Sameer gets glad to meet Shrishti, who tells that she was waiting for the police to leave. She has come to help them in making Babbi admit the truth. She takes their permission to stay back with Preeta. Sameer feels her idea. Rishabh asks her to rest in the room. Preeta wants to be with everyone in the living room. Everyone leaves Preeta and Shrishti alone for a talk. Shrishti is glad to see Luthras being so supportive. Preeta gives the credit to Karan. Rishabh tells Karan that he has to tell something important about Preeta’s case.

He tells that Shrishti has a doubt about the video captured by Sherlyn. He wants to know who paid Babbi to kill Preeta. He tells that Preeta can’t plan Mahira’s murder if she was herself the target, then how did the crime get recorded in the video. He feels there is something wrong with the video, just Sherlyn can answer them. Kareena summons them. She tells them that Mahira suspects Preeta and was supporting her just for Karan’s sake. She tells that they feel Preeta is right, but others feel Mahira is right. Rishabh tells that the goon was hired to kill Preeta. She is tensed about Mahira. She wants Karan to assure Mahira that he has no feelings for Preeta.

Mahira has the dangerous gas spray which will faint everyone. Mahira tells her that Babbi will not inhale the gas and then they will make him flee. Sherlun and Mahira go to evert room to faint down the family members for some time. Preeta and Shrishti sleep. Mahira doesn’t want them to get up and sprays the gas around. Sherlyn wakes up Babbi and asks him to flee. She doesn’t want him to get caught. She asks him to run away and not admit any truth. Babbi agrees to Sherlyn. Mahira tells him not to take their names if he gets caught. Rishabh and Karan get to see Babbi running away. Sherlyn and Mahira act that he has run away by hitting them.

Sherlyn asks Mahira to lie to Karan. Rishabh and Karan follow Babbi. They capture Babbi and drag him back home. Constable sees Rishabh bashing up Babbi. He informs the inspector that Rishabh and Karan have Babbi with them. Sherlyn and Mahira lie that they tried to stop Babbi. Rishabh thanks them. He seeks an answer from Babbi. The family wakes up after the gas effect ends. Rishabh and Karan beat Babbi further and scare him to know about the culprit. Shrishti gets a knife to threaten Babbi. Karan asks Babbi who had sent him to kill Preeta.

He tells that he will stab him. Babbi gets scared for his life. Shrishti records his confession. Babbi tells them that he got paid to kill Preeta, he was committing his accident, but Shrishti saved her, Mahira fell on the road, but Preeta is innocent. Preeta’s innocence gets proved in front of Luthras. Babbi tells that someone hired him with the deadly plan for Preeta. Rishabh and Karan want to know the enemy’s name.