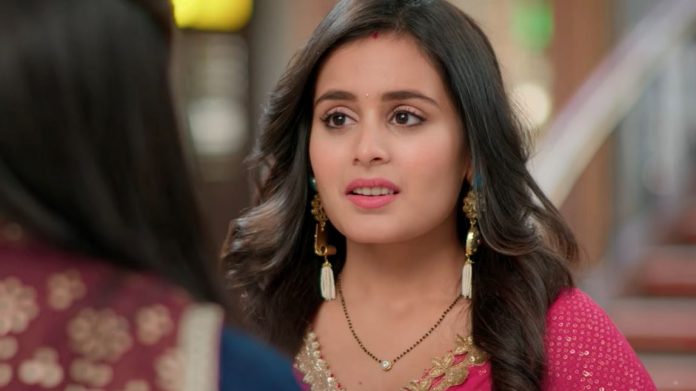 Rishtey Starplus Unwanted family politics ruin Mishti’s joy Abir and Kunal have a cute scene. Kunal wants to tell Abir about Kuhu and his fight, how she kicked him and made him fall down the bed. Kunal wants to take Abir’s help in convincing Kuhu. Kuhu plans a surprise for Kunal. It fails when the wrong car gets delivered. She goes to tell Kunal that he has to wait for the surprise. Abir tells Kunal that he isn’t interested in knowing about her romance, his personal moments. Kunal tells him that its not so personal. Abir doesn’t want to hear anything about his first night. He asks her to apologize to Kuhu even if it was her mistake. Kunal decides to apologize.

Mishti worries that she woke up too late and would spoil everyone’s mood. Abir asks her not to take any tension, since everything is just fine. He tells that she slept on their first night too. She tells him that she got a peaceful sleep, since she was much stressed about their marriage. She drops the family photo frame. She cries on seeing her mistake outcome. She asks him not to tell anyone about her mistake. He tells her that he was just joking, he isn’t upset for anything, its totally fine if she slept for long time. He asks her to stop taking stress and get ready. She tells him that she doesn’t have any idea about cooking.

He tells that she can skip those things. Kuhu tells Kunal that he has to wait for the red sports car. Kunal apologizes to her. Meenakshi tells them about the necklace which she will be gifting to Mishti after her first rasoi rituals. Kuhu thinks that Meenakshi didn’t gift her anything such. She gets jealous again. Abir and Mishti compliment each other. They meet the family. Kuhu tells her that she told Meenakshi that she doesn’t know any cooking. Meenakshi asks her to forget the rituals. Mishti wants to give it a shot. She tells that she will fulfill the rasam. Abir wants to support her. He declares a cooking competition.

The entire family gets involved. Meenakshi asks Kuhu to get the necklace from her room. Kuhu sees the necklace and likes it. She tries it. Meenakshi catches her and makes her more insecure by praising Mishti. She tells that she has to please Mishti just to keep Abir happy. Mishti and Abir have romantic moments while they prepare sweet dish. Abir is sure to win. Kunal is happy to praise his wife Kuhu. Mishti tricks Abir by a moment to distract her. Kuhu angrily breaks the necklace. Abir calls Maheshwaris to be part of the rituals. Maheshwaris come and learn about Mishti’s rituals. Kuhu is upset that everyone favors just Mishti all the time.

Rajshri supports Mishti in the competition. Vishwamber also gives some tips after Mishti’s cake burns in the oven. Meenakshi has seen Kuhu breaking the necklace. She is happy that she is succeeding in creating a rift between the sisters. She knows that Kuhu’s hatred will ruin Mishti’s happiness. The family gets a shock to see the broken necklace. Kuhu smartly calls it a bad omen to save herself. Mishti, Abir and Kunal get upset. Kuhu thinks Mishti won’t doubt on her, because she had promised to end the fights. Mishti blames Kuhu for being jealous of her and breaking the necklace to spoil the gift of first rasoi rituals.