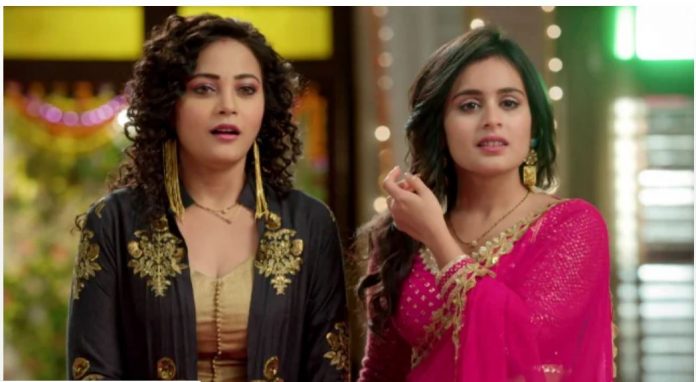 Starplus Top 2 Rishtey Pyar Yeh Hai Chahatein Spoilers Abir and Mishti miss the Shivratri puja because of Kuhu. There is a twist because of Kuhu spiking the coffee. Abir consumes the coffee and loses his consciousness. Mishti struggles to take Abir to the temple. Abir stumbles and isn’t able to walk. Mishti manages to take him to the temple, where the entire family is waiting for them. They get too late.

Meenakshi asks the reason for coming late. Mishti tries to cover up and tells that she was not feeling well. Kuhu and Kunal get a chance to perform the aarti when Mishti and Abir fail to make an entry on time. Mishti and Abir stay far and attend the puja. Abir is still not in his complete senses. Mishti holds his hands and tries to keep him awake.

She overhears Kuhu and Meenakshi’s conversation. She realizes Kuhu had spiked the coffee just to stop Abir and her from coming to the temple. Mishti is much disappointed. Meenakshi is playing games and using Kuhu against Mishti to take her revenge. Abir shockingly faints down, which worries the entire family. They get him back to consciousness. Rajshri makes him drink some water. Everyone looks after Abir. Mishti decides to not forgive Kuhu for ruining Abir’s efforts. She doesn’t know how to settle Kuhu’s growing insecurities.

Mishka wants revenge on Prisha. She feels Rudraksh is insulting Ahana and her, because of Prisha. Rudraksh romances Prisha in front of the media. Mishka gets much jealous. She tells Ahana that she will get Prisha insulted now. Rudraksh is also torturing Prisha by feeding her spicy and salty food. Prisha isn’t able to tell anyone. She stays silent. She knows he wants revenge on her. Prisha also feeds the same food to Rudraksh. Mishka takes scissors and cuts Prisha’s blouse button to create a wardrobe malfunction.

Rudraksh finds Prisha in the worse situation. He runs to Prisha and hugs her to cover up the faulty tear down of the blouse. He doesn’t want Prisha to get humiliated. Rudraksh and Prisha have a moment when he saves her dignity. Prisha realizes that Rudraksh doesn’t hate her so much and isn’t too evil. Yuvraj is also around in the party. He wants to keep an eye on Rudraksh and Prisha.