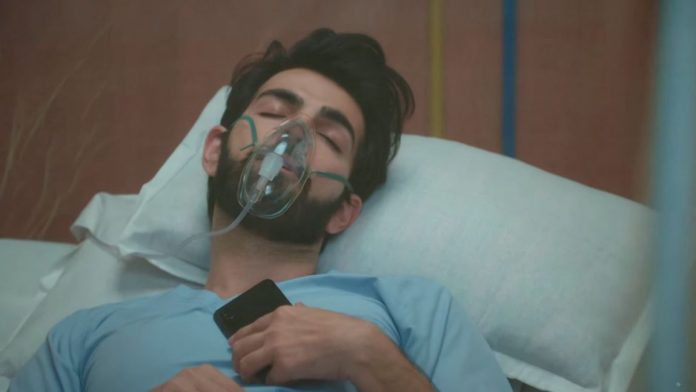 Kahaan Hum Sonakshi to die critical fear for Rohit Nishi meets Sonakshi. Veena asks Nishi to let Sonakshi free, send her back to her family, since they have to now focus on Rohit. She feels sorry for her crime. Nishi assures that she will send Sonakshi home. Veena runs to meet her son. Nishi tells Sonakshi that Rohit loves her a lot, but will soon die. She tortures Sonakshi and likes her being captive. She tells that Rohit got infected and quarantined now, he has just few hours of life left. Sonakshi can’t believe this. Nishi wants Sonakshi to be alive and see Rohit dying. She thinks this will be a big punishment for her. Sonakshi pleads Nishi to let her go to Rohit.

Sonakshi was expressing hatred for Rohit. On knowing about his illness, she melts down and wants to meet him some how. She wishes Rohit stays fine and sound. She doesn’t want him to die. Meanwhile, Rohit tells his staff about the antidote that can be created by injecting the virus to the rare blood patients, whose blood will create antibodies to fight the virus. He tells them that they have to convince the people for the experiment, so that they can find a solution to fight the supervirus. Though the task is tough, he wants his team to work on it. Rohit and Sonakshi yearn to meet. Veena meets Rohit to check on his state.

He tells Veena that Sonakshi can save his life. Veena thinks he isn’t serious. He reveals that Sonakshi’s rare blood quality can give them a solution for fighting supervirus. Veena is shocked once again since she was thinking Sonakshi is a curse for them. Rohit proves that Sonakshi is a blessing for them. He tells Veena that just Sonakshi can save him, no one else. He wants Veena to find Sonakshi and get her for the tests by pleading to her to save lives. Veena gets worried and doesn’t want to fall in his eyes. He tells her that he loves Sonakshi and fate is uniting him with his love. Sumit informs him that the man in police custody isn’t revealing his boss’ name.

Rohit worries for Sonakshi and wishes she is fine. Veena rushes home to get Sonakshi for the huge experiment to create an antidote. Another shocking twist comes when Sonakshi undergoes the experimental test, she fails to tolerate the infection and falls in danger. The doctors team fear to inform Rohit about it, while Rohit also has few hours of his life. Rohit fears that Sonakshi would die if the huge trial goes wrong. How will Rohit save himself, Sonakshi and many patients? Keep reading.

Aman and Roshni get attacked by Kabir, who isn’t a Jinn now, but a Zehraal. He is far more powerful than Aman, who is the king of Jinnat. Aman falls helpless when Kabir turns one of the family member into Zehraal and locks everyone inside the house so that they all get bitten. He tells Aman that his family would be dying by becoming Zehraal. He offers an antidote to Aman only if Roshni gets a magical red key for him. He tells that being an Ayana, just Roshni can get the key from the black jungle, the key will empower him with more evil powers.

He wants Roshni to help him gain more and more powers by unlocking the chest of evil entities. Aman deals with his aunt, who has turned into Zehraal. He locks her up. He has less time to fulfill Kabir’s demand. Aman tricks Kabir by Tabeezi’s help. Aman accompanies Roshni to the black jungle to get the red key and save his family. Kabir has evil intentions to kill Aman’s family and ruin his happiness.