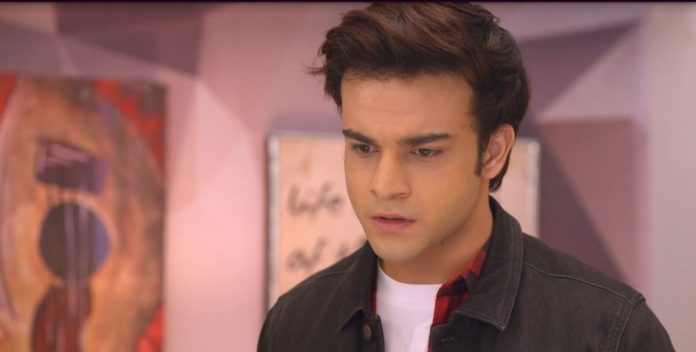 Kumkum Bhagya Time for confession Rhea blasts at Prachi Ranbir spends time with his family and likes to know Vikram’s childhood secrets. Dida jokes on Vikram and shares a laugh. Their smiling faces get pale when Maya’s parents come to meet them. Vikram wants the family to speak to the guests well, since Abhi has assured to handle the matter. He apologizes to Maya’s parents and gets them inside the house. Maya’s dad Chobey tells them that they have come to give Shagun before the engagement. They hand over the shagun. Pallavi gets worried. Prachi comes there for a work purpose and finds Ranbir in trouble again. Ranbir tells Chobey that he is fine.

Chobey threatens Ranbir and asks Vikram to know that Ranbir agreed for the alliance himself. He tells them that someone tried to stop this alliance, but he isn’t affected. He tells Vikram that there is no way to stop the marriage. Rhea also happens to reach Ranbir’s house. Rhea and Prachi get scared when Chobey threatens Ranbir’s family with much love and respect. He scares them in a polite way. They get the moral of the story that Chobey is threatening their lives indirectly. He tells Kohlis that he has to buy some bullets for firing bullets in the air in the engagement function. Kohlis worry once again. Maya’s mum invites Prachi in the engagement.

After the guests leave, Rhea blames Prachi for making the stupid plan. Ranbir defends Prachi. Rhea and Ranbir get into an argument over Prachi’s greatness. Rhea warns Prachi to not put him in more troubles. Prachi stays speechless, knowing the troubles he is facing. Pallavi too vents anger on Prachi. Vikram doesn’t think that Prachi is at fault, since she was just helping Ranbir. Pallavi tells that Maya would have got engaged to Mohit if Ranbir didn’t make that confession to break her engagement. She accuses Prachi. Dida asks Pallavi not to blame Prachi. Ranbir tells that it was her plan to confess love for Maya, Prachi just supported him.

Vikram stops them from the arguments. Vikram admits that Ranbir is wronged, but nothing will get fixed if they blame Prachi. Pallavi thanks Rhea for being with Ranbir. Rhea wants to be with him. Ranbir leaves with Prachi and consoles her. Pallavi assures that they will stop Maya’s marriage with Ranbir. Ranbir meets Prachi in his office cabin. He asks her not to act alienated or avoid him. He tells that he is feeling bad when she is not speaking to him. Dida is worried that Pallavi is thinking to make Rhea her Bahu. She wants to confirm her doubt. Dida asks Pallavi why did she support Rhea, who was just accusing Prachi.

Pallavi tells that Prachi did wrong. She feels Rhea is trying hard to save Ranbir. She doesn’t think Rhea said anything wrong. Dida understands that Pallavi has chosen Rhea for Ranbir. Prachi feels bad that she has taken him to the hotel and it resulted it in a wrong outcome. Ranbir tells her that he was wrong to come up with the weird idea to propose Maya. He is glad that Prachi is supporting him. He tells that he wants to see just the good things in the bad times. Maya lies to her mum that Ranbir had given her the diamond necklace on their date. Her mum is happy. Maya tells that she is happy to marry Ranbir.

Raabta ruined for Kalyani and Malhar

She thinks she got a lottery in the form of a rich guy like Ranbir. She isn’t sure if Ranbir will love her. She thinks she will win his heart some way. Ranbir tells Prachi that he wants her in his life, he gets courage because of her. He wants her to always give hope and strength to him. He asks Prachi not to go away, which would be like killing his hopes. He tells that he will fight any trouble because of her support. Prachi gets emotional seeing her special place in his life. He requests her to not go from his life, to which she agrees.