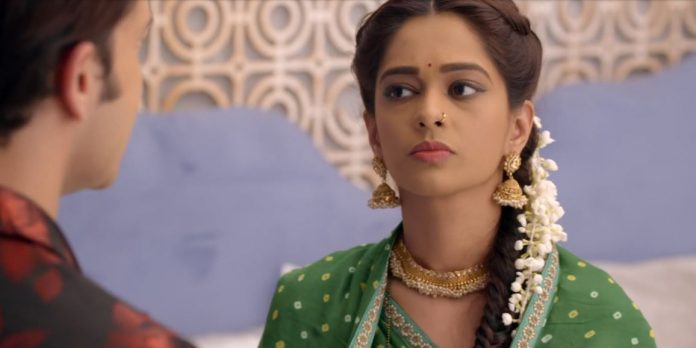 Kumkum Bhagya Prachi unexpected claim Kohlis in shock Chobey tells his wife that Ranbir will surely come, else his family will invite troubles for themselves. He asks her not to worry. He then welcomes Kohlis, who make excuses about Ranbir. Ranbir reaches and gets a great welcome by Maya’s parents. He worries that he is getting more into the trap. He wants Prachi to come soon and rescue him.

Prachi finds Dimple away from home. She wants to reach Ranbir before his engagement. She calls up Dimple to ask when is she coming. Dimple apologizes, since she can’t come home. Prachi insists her to come. Dimple agrees to come, but takes much time. Ranbir is threatened by Chobey. He isn’t happy and feel forced. Pallavi doesn’t want her son to face this, since Ranbir isn’t happy.

Sarita and Shahana reach Ranbir and tell him that Prachi is coming. Maya meets Ranbir and tells her that she has to confess something, she likes him too. She tells that she has realized love for him. This worries him further. He thinks he is stupid to always invite troubles. He doesn’t want to tell anything. Chobey takes them for engagement. Shahana is stressed about Ranbir and Prachi.

Aryan tells that he is also in her team. Sarita feels sorry for Kohlis. She wants to tell them the plan. Aryan doesn’t want them to tell Kohlis, which will make Chobey doubt them. Chobey asks Kohlis to be a part of the engagement.

Maya makes Ranbir wear the ring. Ranbir makes an excuse that he didn’t bring the ring, he forgot it. Chobey tells him that he arranged an extra ring, knowing this would surely happen. Ranbir gets helpless. Prachi makes a timely entry and stops the engagement. She tells Chobey that Ranbir is just of her, he is her husband. Chobey, Maya and Kohlis get shocked.

Ranbir denies to know the girl. Ranbir realizes that Prachi has come as his fake wife. He tells everyone that he can sort this out. He asks Prachi to come with her. He takes Prachi for a talk. He tells that they have decided to get Dimple. She tells that Dimple wasn’t home and went for shooting, she would have come late. Prachi explains that it was her decision to reach the venue as the fake wife. He tells her that they can really marry. She tells that he will not show her face, she has donned the ghunghat.

Ranbir asks her to see his charm, he will manage everything. Kohlis are worried. Dida asks Pallavi to spare Ranbir. Vikram feels all the girls are after Ranbir. Everyone is confused about the girl. Chobey asks Maya not to worry, Ranbir is a bachelor. Shahana wants to know who is the girl, if not Dimple. She finds Prachi under the ghunghat. She tells Sarita and Aryan that its Prachi doing the drama. Chobey and Kohlis show trust on Ranbir. They don’t believe that Ranbir can get married secretly. Ranbir accepts Prachi as his wife. He lies that he got married six months back. Pallavi asks Ranbir to tell how the girl threatened him.

She doesn’t want him to be under pressure. Ranbir asks Pallavi to understand his plan. Pallavi asks Chobey to get Ranbir and Maya married. Prachi opposes. She produces marriage photo as a proof. She lies to them that Ranbir has married her, they can’t deny it. Vikram doesn’t want to accept her as Bahu. Ranbir gets helpless and fails to explain his family.