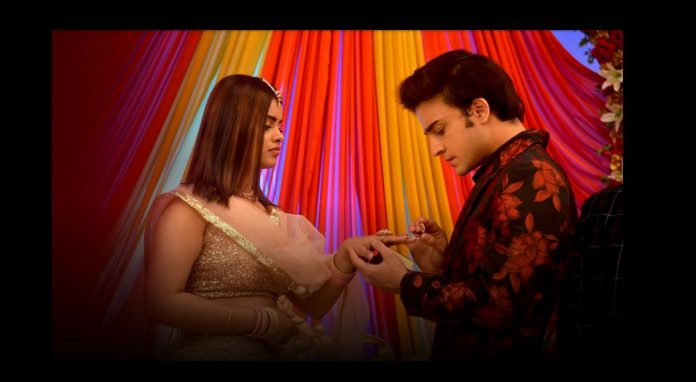 Upcoming Kumkum Bhagya Zee5 Colors Spoilers lined Prachi is worried to know that Dimple has left for some other work assignment, she isn’t in the city. She doesn’t get any idea than becoming the girl herself. Ranbir is surprised to see her. She tells him that she has called Dimple, who told that she may be coming, but it will be take time, which they can’t afford. She tells that she instead thought to become the girl playing his fake wife. Ranbir understands that she was really jealous of Dimple and chose this option willingly.

He asks Prachi if she can become his wife, like he is proposing her really with love. Prachi gets touched and confused. Ranbir and Maya execute their plan to break the engagement. Ranbir gets forced by Chobey for the engagement. He goes on the stage and meets Maya. He is asked to exchange the rings. He waits for Prachi’s dramatic entry to stop his engagement.

Tujhse Hai Raabta:
Kalyani tells Malhar that she is nothing without her, but the baby is important than him. She asks Malhar to let her do what she wants. He doesn’t want to get away from his life. He asks her to agree for the abortion. He refuses to get the abortion done. Malhar tells her that she is everything for him. Kalyani wants him to have faith on her. Atharv enjoys separating them. Kalyani tells her that she can lose her life because of the baby. She doesn’t think he should decide for her life. He angrily tells her that her life is of him since the day they fell in love, he can’t let her selfishly decide for her life alone. He can’t live without her.

Naati Pinky Ki Lambi Love Story:
Gagan asks Pinky to pay him money if she wants to get her freedom. He asks her to give him alimony if she needs the divorce. He tells her that she can apply Holi colours to him and accept him as her husband. He asks her which way will she go now. Arjun interrupts Gagan. He tells Gagan that Pinky will decide to choose her freedom. He leaves the decision on Pinky. He wants her to value herself and not get under any pressure. Gagan tries to insult Pinky. She stays strong and replies back. She decides to get her freedom.

Shubh Aarambh:
Raja misunderstands Rani and breaks his relation with her. He doesn’t think of anything and tries to oust her. Rani doesn’t leave the house. Kirti tags her a shameless bahu and taunts her. Rani tells her that she will become a shameless bahu now and not let anyone move her out of the house. She challenges Raja and his family. She gets determined to expose the evil doers.