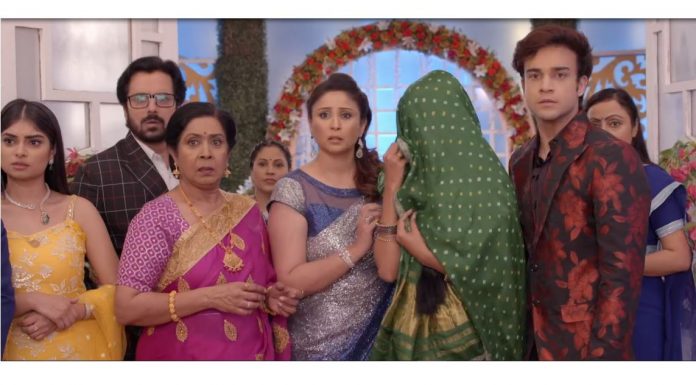 Kumkum Bhagya Maya Ranbir Jabariya Jodi twists Prachi declares that she is married to Ranbir. She gives a proof of marriage along with the long story. His family denies to accept the girl. Ranbir tells them that the girl is right, he has married her. He tries to explain them and winks them. Pallavi doesn’t understand him. She asks him why did he do this. She asks if he knows the girl, if she is his friend. Prachi shows her face to her. Ranbir tells that Prachi is helping them. Pallavi accepts Ranbir and Prachi. She teams up with them. She tells that she will accept the destiny and not oppose it. Chobey commands them to stop the drama. He wants to know about the girl.

He doesn’t accept Ranbir’s marriage with the girl. He wants Ranbir to marry Prachi. The Ngo ladies arrive as per Sarita’s plans. The ladies ask them to give Ranbir’s wife her rights. Sarita and Shahana get glad. Pallavi supports Ranbir and the new drama. Maya tells them that they will not believe anyone, who randomly comes and claims to be Ranbir’s wife. Prachi asks her to believe Ranbir. Maya and Prachi fight for Ranbir. Pallavi likes Prachi’s emotional dialogues. Ranbir is also impressed. Pallavi tells Dida and Vikram to go and help Prachi, who has come to help them. Maya’s mum asks Prachi to unveil and show her face. Dida asks her to not unveil the newly wed without the Mu dikhai rituals.

Pallavi tells that they will go home and complete post marriage rituals. Vikram asks how can the girl show her face without any rituals. Ranbir tries to rush his family out. Chobey doesn’t let them leave. He wants Ranbir to marry Maya. The Ngo ladies create hurdles for Chobey and warn him of dire consequences. Prachi does a perfect drama to end the matter and rush out. She tells Chobey that she doesn’t want to curse Maya. She asks him to let live and let them live, by sparing her husband. Dida tells that she will support her. Pallavi asks Prachi not to give any curse. Maya’s mum asks her to let Ranbir go and call off the marriage, since Ranbir is already married. She is scared of Prachi’s curse.

She is God fearing. She doesn’t want any curse to ruin their family. Maya asks her not to think of all that. Shahana gets glad that Prachi’s plan is working. Maya’s mum wants to see her happy. She wants to explain Chobey, who doesn’t listen to her at all. He takes it as a matter of pride. He doesn’t want his reputation to get tarnished. He asks Maya to marry Ranbir and save the family reputation. Prachi gets praised by Kohlis. They wonder what is Maya’s parents planning. They want to get rid of Chobey. Pallavi thanks the NGO women for coming to support. They tell that Pragya has sent them by convincing them about Ranbir. Ranbir and Pallavi want to thank Pragya.

Shahana tells them that Chobey doesn’t want to spare Ranbir. Chobey summons them. He tells that Ranbir has to get married. He wants to save his image and reputation when the elections are close. He tells that he will arrange a guy for marrying the girl, but Ranbir has to marry Maya. He gets Maya’s cousin to marry Prachi. Ranbir opposes this madness. He accepts that he is married. Maya and Ranbir get into an argument. Maya doesn’t want him to go away. Maya demands to know about the girl. She finds Prachi and learns that it was just her plan to save Ranbir from the engagement. Maya and her parents get angry at Prachi. Pragya comes home and doesn’t find anyone. She wonders where did everyone go. Chobey asks Prachi why is she doing this with Maya.

Maya exposes Prachi. Chobey asks Ranbir and Prachi to end the drama. The matter goes out of the hands. Prachi tells that lives get spoilt if relations are forced. She tries to clear Chobey’s misunderstanding. He forgives her and asks her to leave. He wants Ranbir and Maya to get engaged. He tells that none can stop the engagement now. Aaliya goes to meet Rhea. Pallavi seeks Aaliya and Abhi’s help. She tells that Chobey isn’t letting them leave. Chobey gets threatening Kohlis, who oppose the engagement. He forces Ranbir and corners him. Ranbir gets helpless when he faces the injustice. The family feels bad for Ranbir. They fail to help him. Chobey gets Ranbir and Maya engaged. He congratulates Kohlis and invites them in the holi function.