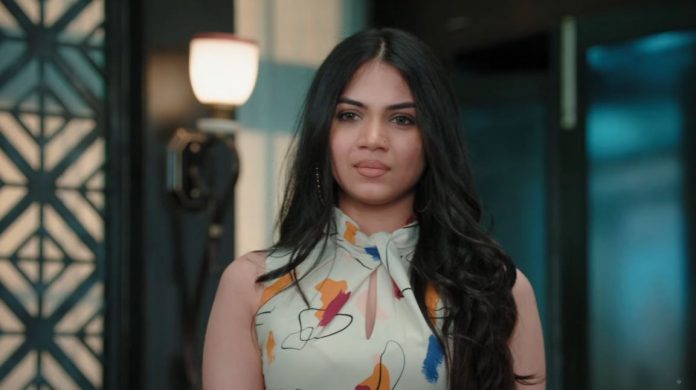 Kahaan Hum Starplus Battle time Pooja joins Ronakshi Rohit recovers in a few days of time. He brings Sonakshi home. She gets emotional on recalling the time when Rohit kick ousted her from the house. He apologizes to her and welcomes her in the family again. Sonakshi is still in nurse Parvati’s disguise. She tells him that they will be finding a way to expose Nishi. Veena welcomes Rohit home. He tells her that he has got Parvati for his help, he needs her since she is specialized in dealing with supervirus cases. Veena has no objection to have Parvati home, but Nishi doesn’t want so. She asks Parvati to leave. Rohit and Sonakshi come up with a drama in time to influence Veena.

He acts to faint and tells how much he needs Parvati’s care. Nishi tells that they can manage Rohit, even staff is in plenty to help. Veena tells Nishi that she doesn’t want to take any risk about Rohit’s life. She wants Parvati to look after him until he gets completely fine. Sonakshi and Rohit go to their room. Sonakshi has many memories with the place. Rohit hugs her to romance her, since he is at peace after a long time. Their romance breaks when Veena reaches there. Rohit pulls Sonakshi’s leg by asking her to give him a sponge bath. Veena asks Parvati to assist Rohit and look after his health. Sonakshi is worried for Naren.

She asks Rohit to focus on their plan to expose Nishi’s truth. Rohit tries to get close to Sonakshi and reminds her tv show romance. She asks him to get serious and stop Nishi from harming Naren. Rohit feels she has killed his romantic mood. He tells her that Nishi can control Naren’s pacemaker by her app. She asks him to get Nishi’s phone and delete the app. He doesn’t think its easy, since they don’t even know the password. He tells that they can’t afford to alert Nishi. Sonakshi meets Vimmi and soon gets her identity known. Vimmi decides to help her. She believes Sonakshi and worships her.

She tells that she knew her truth, since she has seen her disguised look in one of her show episodes. Sonakshi tells her about Nishi. Vimmi asks Sonakshi to fix everything in the family. Sonakshi assures to manage Nishi. She gets a medicine to trouble Nishi. She spikes the soup. Pari happens to see Sonakshi. The Rastogi sisters get into an argument. Pari is breaking Tanya’s family to get rights for her child. She wants Tanya to leave Sippy family. Sonakshi doesn’t want Pari to give sorrow to Tanya. She is ready to take the child’s responsibility. Pari doesn’t listen to her.

She threatens to expose Sonakshi’s truth and ruin her plans. She asks Sonakshi not to dare come in her way. Sonakshi calls Suman to tell that Pari is wrong. Suman tells that Pari isn’t completely wrong, she is just securing her child’s future. Sonakshi doesn’t think Pari is doing right to ruin Tanya’s life. Suman then agrees with Sonakshi’s view. Sonakshi thinks to deal with Pari later. She waits for her plan to work. Nishi likes to eat the soup and soon gets suffering with diarrhea. She runs to the washroom and gets dehydrated.

Rohit and Sonakshi’s romance goes on, which gets witnessed by Pooja. Pooja doubts on Parvati. Sonakshi acts to help Nishi and then gets her phone. She takes the phone to Rohit. Rohit and Sonakshi try to crack the password. Pooja finds them together. She identifies Sonakshi and yells at her for entering the house. She asks Rohit if he has forgotten that Sonakshi harmed Naren and accused Nishi for the crime.

She wants to tell the family about Sonakshi. Rohit and Sonakshi stop her and ask her to listen to them once. Rohit asks Pooja to trust him, Nishi is responsible for harming Naren’s life, she has framed Sonakshi and broke the family. He tells that Nishi is controlling Naren’s pacemaker by her phone. Pooja hacks the phone and finds that there is no such app. Sonakshi realizes that she got the wrong phone. She goes back to get Nishi’s phone. Nishi learns Sonakshi’s truth and attempts to kill her.

Reviewed Rating for this particular episode Kahaan Hum Starplus Battle time: 5/5
This rating is solely based on the opinion of the writer. You may post your take on the show in the comment section below.