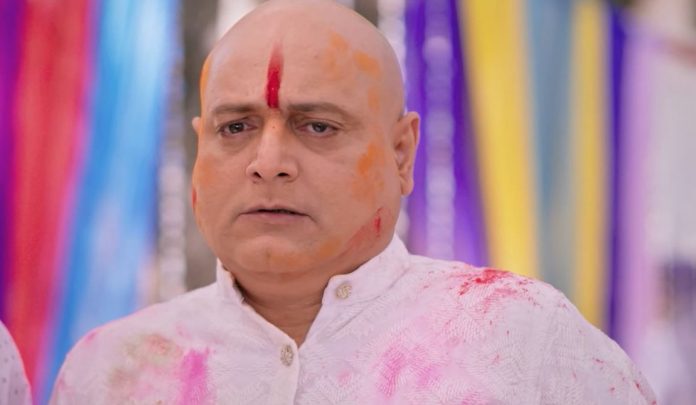 YRKKH Javeri to kill Naira Video exposes Lav Kush Naira feels Trisha has lost the case and also the colours from her life, there is no hopes left, she won’t be celebrating the festive of colours, Holi. Kartik tells Naira that they will not let wrong happen, they still have the chance to rectify things. Javeri asks Goenkas to throw a grand Holi party to celebrate the freedom of their children. Samarth tells that they shall invite Kartik and Naira for the party so that they have a family reunion. Lav, Kush and Abhishek celebrate their victory and drink beer. They don’t realize their mistake.

Lav and Abhishek think they are rich and none can harm them, when Javeri is ready to defend them. They call Trisha to insult her. They compel her to apologize to them by pleading them. Trisha gets helpless and sheds tears, while apologizing to file the case on them. She accepts her defeat. Kartik and Naira get moved on hearing Lav’s shameless talk. Kairav tells them that they will burn their sorrow and pain in the holika fire. He wants his parents to get rid of their tears and sadness. Singhanias burn the Holika and pray that the evil ends. Kartik tells Naira that he has a plan, they will try again to deal with Lav and Kush.

Dadi and Suwarna meet Trisha and try to offer a compensation for her pain. Suwarna sympathizes with Trisha, while Dadi tries to end the matter forever. Dadi asks Trisha to accept the money and forgive her grandsons. This angers Kartik and Naira. They can’t believe that Dadi is fixing a price for Trisha’s humiliation, pain and sorrow. Kartik asks Dadi not to insist Trisha. Trisha tells that she will never forgive Lav and Kush, though she has spared them from punishment. Dadi doesn’t realize her mistake. She invites Kartik and Naira home for a reunion on festive. They wants them to be with the family.

Suwarna also makes the same request. Kairav promises to meet Goenkas. Kartik and Naira find him too excited. They don’t know to visit Goenkas, where everyone will be celebrating Lav and Kush’s freedom and support them. Kartik doesn’t want to face his evil brothers. Dhruv meets them and surprisingly gets the video clip, which proves Lav and Kush’s crime. Kartik and Naira are happy and plan to celebrate Holi with Goenkas. They are sure that no one will be able to forget this Holi. Kartik and Naira meet the family. They save Manish from falling into the deep pit. They get emotional. Goenkas learn about the place dug out for the municipality work. Javeri asks them to cover the pit.

They want Kaira to stay with them again. Kartik and Naira fix a big screen to show a special video. Abhishek informs Javeri about a video clip. Javeri gets worried. He calls the people to stop Kartik and Naira from playing the video. He tries hard to stop Naira. Naira meets a mishap. Javeri attempts to kill her, and ultimately gets caught by Goenkas. The video clip exposes Lav and Kush. Will Goenkas get them punished this time? Keep reading.