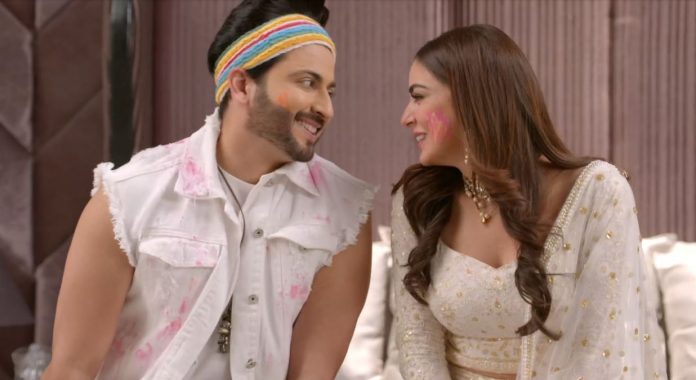 Zee5 Kundali Bhagyaa Prithvi Mahira plans backfire The family wants to be with Mahesh and not leave him alone for a moment, until he gets fine completely. The family is very happy and await him to talk to them. Rishabh and Karan thank Preeta for stabilizing Mahesh. Prithvi doesn’t want Mahesh to recover. He wonders why is Preeta willing to help Luthras. He wants to stop her in a way that she doesn’t doubt him. He finds everyone in a happy mood. He bribes the waiter to spike a drink for Preeta. He lies to the waiter that his wife is adamant and doesn’t care for herself. He wants her to be fit and fine. Preeta and Karan take the drinks.

Prithvi wishes that Preeta gets intoxicated. Karan feels dizzy after having the spiked thandai. Prithvi waits to meet Preeta. He wants Preeta to become useless for Luthras. He also aims to separate her from Karan. He boasts of his smartness. He thinks he has handled Preeta well and now he has to deal with Mahesh. He takes the thandai and argues with the waiter. The waiter wanted to stop him from drinking the spiked thandai. Prithvi has no idea what he has consumed. Rakhi asks Preeta to make tea for Dadi. Preeta is more than happy to help. She doesn’t care for Mahira or Sherlyn.

She just wants to look after Mahesh. She tells that she will not spare Mahira. Sameer asks what did Mahira do. Shrishti tells him that Mahira locked Preeta and her in the guest room. Sameer loses his mind on hearing this. Preeta tells that she will see Mahira when time comes. He asks her not to waste time and tell everyone about Mahira, so that they can deal with her. She doesn’t want to spoil the happiness. Shrishti suggests that they will lock up Mahira in the same way as she did, so that Mahira gets away from Luthra family. She wants Preeta to spend time with the family. Preeta likes her idea.

Shrishti asks her to spend time with Karan. She sends Preeta. Shrishti tells that they should inform Karan about Mahira’s evil. Sameer wants Preeta and Karan to be together. He tells that they can’t see the old days if anything goes wrong now. Shrishti finds it cute when he talks sensible things. Mahira is tensed about Preeta and Karan’s meeting. Sherlyn is much scared to get her crime exposed by Mahesh. Shrishti tricks them to get them to the storeroom. The elders are emotional about Mahesh. Rishabh pacifies Rakhi. He asks her to keep high hopes and wait for Mahesh’s consciousness.

He wants them to let him take good rest. Sherlyn and Mahira fall into Shrishti’s trap. Shrishti and Preeta lock them. Sherlyn and Mahira realize Preeta’s plan. Preeta tells that she will not free them now. She lectures them and asks them to be in the storeroom, if they can’t see anyone’s happiness. Karan and Preeta share a moment when they wish each other happily. He tells that he isn’t feeling good. She panics on knowing that he has consumed the spiked drink. She beats him for flirting. He admits that he likes her and will express it. She also feels dizzy because of Prithvi’s plan. She tells that he has many enemies in his house. Karan expresses his love for Preeta.