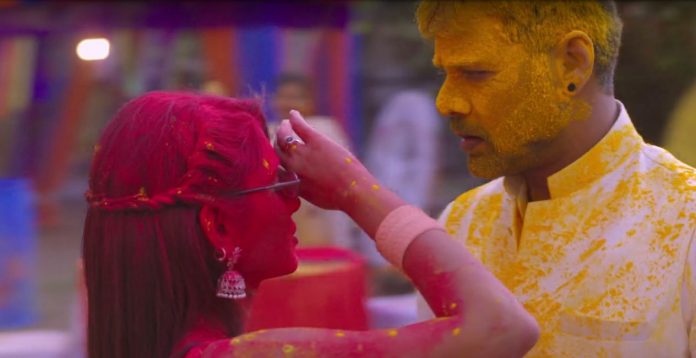 Kumkum Looped Bhagya Abhi Pragya Holi twists Sarita understands Pragya’s emotions well that the latter is missing her emotions. Abhi asks Vikram to play holi, and not force him. Vikram knows that Abhi isn’t playing since his wife isn’t along. Abhi tells that he just plays Holi with his wife. He doesn’t want anyone to throw colours at him.

Abhi goes to help a waiter who gets smeared by the colours by someone’s mischief. Some people throw colours at Abhi. Abhi unknowingly throws colours at Pragya. They still fail to recognize each other and get away before meeting.

Sarita asks Pragya if her husband has smeared the colours on her. Pragya misses Abhi and cries. She clears the colours. Maya confronts Prachi for chasing Ranbir for his money. She warns Prachi against snatching Ranbir. She tells that Ranbir is her fiance now. She is going to marry Ranbir soon. Prachi provokes her to admit her plans. Maya gets Ranbir’s call. He calls her to his room. Maya tries to make Prachi jealous. He wants to spike Maya’s drink and then make her admit her mistake. Prachi waits for them to meet so that she can record Maya’s confession.

Meera goes to meet Pragya. Sarita tells that Pragya had played holi unknowingly because of someone. Aaliya wants to see Prachi’s mum. Meera asks Pragya who had smeared the colours. Pragya tells that she didn’t see the person, it was not intentionally. Aaliya misses to see her. Prachi tells Pallavi and Dida that she is trying to bring out the truth. Ranbir cares for Prachi with love. Dida finds his love for Prachi. She tells Pallavi that she will tell her thought later. Pallavi wants to know what is happening. Dida tells Pallavi that Ranbir has become a gentleman and cares for Prachi a lot. Sarita takes Pragya to some room.

Pragya goes to wash her face. Abhi and Vikram meet Sarita. Abhi speaks to Sarita and Pragya hears his voice. She stays confused and thinks she is imagining. Abhi tells Sarita that he will play holi with her. Sarita asks them to meet Prachi’s mum. Abhi agrees to meet her. Ranbir takes care of Prachi. They get into a moment. They love each other, but doesn’t want to confess. He waits the time when she reciprocates his feelings. Aaliya spots them together and turns angry. Pallavi asks Prachi about her plan to stop Ranbir and Maya’s marriage.

Prachi and Ranbir share the plan of spiking Maya’s drink and record her confession. Pallavi likes their plan. Abhi and Vikram play a childish game with Sarita. They enjoy. They see Chobey and run out of the room. Pragya fails to see Abhi once again. Sarita tells that Vikram went to talk to Chobey to stop Ranbir’s marriage. Pragya gets emotional after seeing Abhi’s guitar there. She recalls Abhi. Ranbir gets compelled by his family to hurry up in his plan.

He feels spiking Maya’s drink maybe wrong. Prachi asks him not to take Maya’s side. He tells that Maya also spiked his drink, he is a good person and doesn’t want to do the same. Dida takes the thandai for Maya. Maya refuses to have it. Dida asks her what’s the big deal, she can have a drink. A girl takes the thandai from Maya. Ranbir goes to insist Maya for having the thandai.