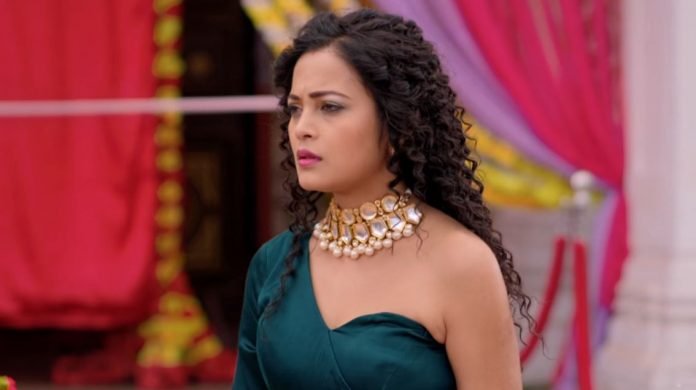 Rishtey Starplus Shock for Kuhu Meenakshi rages at Abir Abir and Mishti celebrate on their first patch up date after marriage. Mishti tells him that she never handled the family issues, since she has the back up from Rajshri and Vishwamber, who raised her with much love and care. He apologizes since he didn’t mean to hurt her feelings. She tells that she will learn from him about handling such sensitive issues in the family to keep them united. He tells her that they have to follow their instinct and take decisions for the family.

He shows his faith on Mishti. Parul cleans the place and is assumed as the servant. The media persons think she is just a servant and ask her to get out of the frame. Abir and Mishti feel bad for her and take a stand for her. They still want Kunal to stand for her. Parul doesn’t let Abir say anything. She tells that she is Kunal’s Maasi. Meenakshi praises Mishti just to make Kuhu sidelined. Kuhu grows jealous as always.

This surprises Kuhu and Meenakshi. Kuhu asks Meenakshi who will inaugurate the logo now, when Kuhu got the company back. Meenakshi tells that Kunal’s mum will have the honour. She wants to launch the logo. Kunal thinks of Parul’s right. He asks Mishti about her decision to return the gift. She tells that he can handle his company the best. He takes her advice about Parul. She tells that her parents were bad, but his mum is really kind. She calls him a lucky man and asks him to better think of Parul’s rights. She tells that Parul sacrificed a lot for his good upbringing and future. She tells him that she got a new saree to gift Parul.

Kunal looks forward for the launch event. Abir advises him to take the right decision. He tells that he will always be proud of Kunal. Kunal gets into a dilemma over giving right to his mum Parul. Mishti gets Parul in the event. Meenakshi gets irritated when Parul gets the attention by the media. She asks Kuhu why didn’t she gift the saree to Parul. Kuhu tells that she regards Meenakshi as Kunal’s mum, not Parul. Maheshwaris also get interviewed and praise Kunal for being a really hardworking man, running his company successfully. Varsha sings Mishti’s praise on knowing that Mishti returned the company to Kunal.

She tells that Mishti always thinks for the best of the family. She decides to gift Meenakshi after the inauguration function. Abir wants Kunal to accept Parul. Kunal tells that he respects Parul a lot. Abir asks him to give Parul her rights today in the launch event. Kunal agrees to him. Abir believes that Kunal will set everything fine. Meenakshi tells the media that Kunal took the company to new heights of success. Kunal wants Meenakshi to trust his decisions and support him. Meenakshi tells that she is always with him.

Kunal reveals to the media that Parul is his mother, who gave him birth, while Meenakshi has raised him with much love. Maheshwaris didn’t know this truth and are shocked knowing it. Meenakshi and Kuhu didn’t wish the truth to come out. Abir and Mishti get happy that Kunal finally gave the motherly right to Parul. Abir tells that they should support Kunal, he is lucky like Kanha to get love from both the mothers. Nanu and Abir support Kunal and call Parul for the launch. Parul launches the logo and gets glad on getting her son’s support. Parul gets the deserved respect. Varsha gives the gift to Parul.