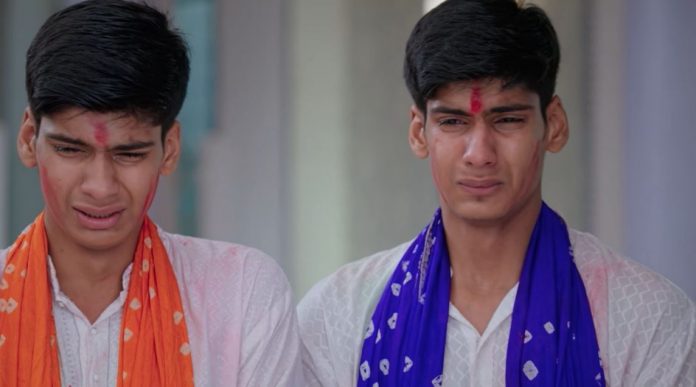 YRKKH Amazing Kaira Starplus Lav Kush punished Javeri denies the accusations and asks Kaira to get proof against him. He tells that he didn’t push Naira into the pit, he can change the court decision in his favor with ease by stating that Goenkas are framing him. He tells that they should be thankful that he has saved Lav and Kush from the case. He tells that they knew about Trisha’s molestation, still she didn’t get justice because there was no evidence in her favor.

Kartik tells that the kids should see it and become able to differentiate between right and wrong, so that they don’t commit any such crime in the future. He wants Kairav and Vansh to know that if they are wrong, they will get punished, the outcome of a bad deed will be deed. Kartik and Naira tell that the video is recorded by Kush, while Trisha was molested. She tells that truth will come out ultimately. When she plays the video on the tv, the family finds Lav, Kush and Trisha molesting Trisha. Kairav and Vansh get scared.

Dadi and Suwarna don’t want to show such a crime to them. Naira asks if they are ashamed to show it to the kids, then how could they support Lav and Kush for their crime. Naira finds kids terrified and sends them away. She tells that they should ensure that the children never do anything wrong. Lav and Kush feel ashamed of their crime when they fall in their family’s sight. Kartik and Naira reprimand them for their crime. They ask Lav and Kush if they didn’t think of humanity when they molested Trisha. They ask if Goenkas would tolerate such a crime committed with Mansi or Kirti. Kartik feels ashamed of his brothers.

The entire family sheds tears and realizes their mistakes. Naira tells that Lav and Kush have already ruined their lives by walking on the wrong path. Kartik tells that Kairav is learning wrong things since they are supporting Lav and Kush, knowing their crime. Naira asks Dadi how could she support her grandsons and forget the difference between right and wrong. She asks Surekha if she will sacrifice Kirti or Mansi if needed to save her sons. Dadi and Surekha feel speechless. Dadi slaps Lav and Kush. She feels guilty that she didn’t teach good values to her grandsons. Akhilesh, Surekha and Dadi regret for their wrong upbringing.

Samarth and Gayu also support Kaira in their attempt to get justice for Trisha. Kartik counts Naira’s sacrifice, since she has always taken a stand for the truth. He is proud of Naira. Kartik wants the family to get Lav and Kush punished. Kartik slaps Abhishek, while Javeri intervenes. Kartik and Naira try to make Javeri realize his wrong thinking by counting his crimes. They ask Javeri to respect his profession and give right upbringing to his son, else he won’t be able to save Abhishek from the punishment. They lecture Javeri and clear his mind. Kartik asks Javeri not to pass on his crimes and evil to his son in legacy.

He tells that Javeri should clean the society by punishing the wrong. Javeri regrets for his evil and finally gets sense. Manish tells that he will call the police to get the evil guys arrested. Javeri tells that he accepts his crimes and hugely regrets. He apologizes to them. He calls the police to get his son and Lav Kush arrested. He tells the truth to the police. He feels sorry to Trisha for staining her character. He thanks Naira for showing him the right path.

Naira finally gets justice for Trisha. Lav, Abhishek and Kush pay for their crime. They get arrested. Kartik and Naira decide to return home and stay happily with Goenkas. Dadi blesses them. Everything gets fine for Kaira.